Only Lovers Left Alive: K-Pop and K-Drama Romances and Break-Ups of 2019 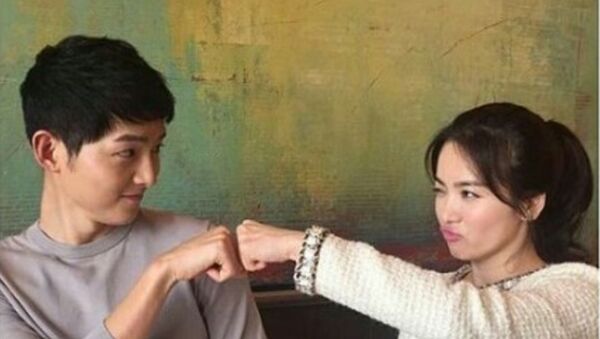 The outgoing year 2019 can really be described as having been filled with breakups, but it had a little romance, too. Here is a summary of the past year.

The End of Song-Song Couple

Famous actors Song Joong-ki and Song Hye-kyo, who fans called the "Song-Song couple", shocked everyone with their sudden divorce in 2019. Song Joong-ki's representative submitted the request and stated to the Korean press that the pair wants to get divorced in June. The Song-Song couple married back in 2017, having grown close on the set of the K-drama “Descendants of the Sun” in 2016, and their chemistry brought enormous success to the TV series all over the world, being awarded for its popularity. The official reason for the divorce is differences in personality.

The news really broke the hearts of fans:

song joong ki and song hye kyo are getting a divorce and I have no words to express how devastated I’m to see the dreamy SongSong couple actually breaking up... to me they looked so perfect for each other 🤧 pic.twitter.com/XGnKnB9IrN

Song Joong Ki filed divorce for their marriage from Song Hye Kyo.
Me and every fans rn:
Help me to calm down y'all. :'( pic.twitter.com/DU8hvQCVT0

Another famous actor couple began dating in 2015 while making the K-drama “Blood”; they confirmed their relationship and married in 2016. Suddenly, Ahn Jae-hyun and Ku Hye-sun announced their divorce in August after three years of marriage.

The divorce was followed by a series of controversies, when the actors made competing for accusations against each other on SNS, leaving netizens in shock, revealing intimate details about their private life. For example, according to Ku Hye-sun, one of the reasons that Ahn Jae-hyun asked his wife for a divorce was because her nipples were not sexy.

On 1 September, Ku Hye-sun announced her retirement from the industry via Instagram and ended her contract with HB Entertainment. Ahn Jae-hyun, meanwhile, deleted all the posts on his Instagram in order not to harm the promotion of his latest drama “Love with Flaws”, which was released on 27 November.

Fans were left divided, supporting the two sides, leading to an even bigger mess:

F*ck this man!
I was prepare myself to sleep then i read those article and This "guy" name on Trending 😡

I read text messages between ahn jae hyun & goo hye sun and now im sad 😕 turned out hes the one who wants to get divorce. 🥺🥺

Falling in love is easy, easily getting married is different. Anyway Goo Hye Sun's terrible, they could've finish the divorce process silently but she went nuts. I pity Ahn Jae Hyun he's the getting all the blame, and he just started to have his come back https://t.co/s2PsQVBBN7

I remember when Ahn Jae Hyun and Goo Hye Sun got married, all I saw were #couplegoals everywhere and people said he looked at her with honey dripping out of his eyes or whatever. Now I'm reading they are divorcing and he said her nipples aren't sexy? What da heck is this? pic.twitter.com/qdf1FOryib

In August, South Korean news portal Dispatch, well-known for its relationship revelations, broke the Internet with news that Kang Daniel and Jihyo of TWICE were seen on a date in the neighbourhood of Hannam in Seoul. According to the report, the couple began dating at the beginning of the year and have since been meeting more than once a week.

Jihyo’s agency JYP Entertainment and Kang Daniel’s agency KONNECT Entertainment confirmed that the couple was dating the same day. Kang Daniel even left a long apology letter for causing so much worry among his fans.

Fans of both idols mostly took the news favourably and the two are still together - or at least no news of separation has appeared.

jihyo as we know is really sweet and kind girl. Kang Daniel also a kind person. They really match together. Just fans dont being bi*ch about this. I know everyone really give a positive reaction about this. But really let them be happy☺

Fast but Hot: Kai from EXO and Jennie from Blackpink

Back on 1 January, the year 2019 started with breaking news for all K-pop fans: the main dancer of EXO, Kai, and the main rapper of Blackpink, Jennie, were seen dating. Photos of the two idols on their date were released by Dispatch, which has a tradition of revealing celebrities' relationships on New Year.

According to the report, the two artists spent time together in Paris in October 2018 on Fashion Week, where Jennie was at the Chanel show representing the brand, while Kai was the ambassador of Gucci. In November, Dispatch spotted the two celebrities on a date. The tabloid also reported that Kai visited Jennie on 2 December after returning from a trip to Hawaii.

SM ENT CONFIRMED THAT THEY'RE DATING EACH OTHER

The SM rep confirmed, "Kai and Jennie have mutual feelings for each other."

Congratulations to the first idol couple of 2019! pic.twitter.com/xYwzuNfVeB

But after just one month of dating, on 25 January, the two artists reportedly broke up and decided to focus on their careers. For now, it has not been confirmed by the agencies that both idols are involved in a relationship.

Those who supported the star couple are still trying to find connections to show that they are still dating.

Jennie and kai called each other and ask each other "how did they know that we're still dating?" we stan https://t.co/LkdaEcaueM

i think if Kai and Jennie are still dating, i think they're worth for each other

Jennie may look so bold and shady but she's the nicest and pure baby in the Blackpink, she has a wholesome heart and much kindness.

dispatch on the 1st of january 2020: kai of exo and jennie of blackpink are still dating

Even though Kai and Jennie didn't date for very long, they tinted the whole year. Now, everyone is waiting to see whose romance Dispatch will reveal to the public.