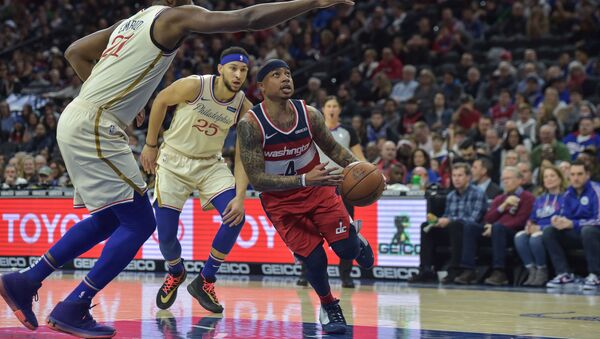 The Washington Wizards lost to the Philadelphia 76ers 108 - 125 on Saturday night, but the regular season NBA Eastern Conference game attracted media attention not because of the game's highlights, but because Wizards guard Isaiah Thomas was ejected after an apparent squabble with a Sixer fan.

At the very end of the road game at the Wells Fargo Center in Pennsylvania, Thomas drew a foul and received a chance for two free throws. The stands crammed with Sixers colors did their best to curb the two-time All-Star guard's flawless shots. Thomas made one of two and, after a timeout, he resolutely moved toward the crowd.

The confrontation with the fan resulted in the referee ejecting Thomas from the game, as NBA rules make no exception, strictly prohibiting players from entering the stands. The same rule, conversely, refers to fans. The incident was caught on tape and instantly went viral on social media.

Isaiah Thomas was ejected for entering the stands and talking to a pair of Sixers fans #RepTheDistrict pic.twitter.com/aRqmvNWUQ2

​After the game, the Wizards guard detailed his behavior, saying that he missed a first free throw and made a second and that is when he spotted a man who had both of his middle fingers up, chanting slurs: "F**k you, b**ch!"

"So then the timeout goes, and I go in the stands to confront him [...] I say, ‘Don’t be disrespectful. I’m a man before anything and be a fan [...] And his response was, ‘I’m sorry. I just wanted a Frosty' because if you miss two free throws, I guess the fans get a Frosty", Thomas said, adding that “The league knows I did nothing wrong [...] I’m a man before anything, and that just wasn’t OK to do - and I just had to say something”.

'Get a Frosty' - is a 76ers branded product promotion: "Wendy’s Frosty Freeze-Out". The ads offer fans free desserts if "an opposing player misses two consecutive free-throw attempts in the second half of a 76ers home game".

In a separate statement, Thomas pointed out that the young man "crossed the line" and asked security to kick him out of the game "cause that's no way, shape or form that should be allowed at all".

Isaiah Thomas explained why he went into the stands to confront a Sixers fan. pic.twitter.com/ZpYrmEHZKz