Turkey Does Not Recognise Greece's EEZ Claims, May Involve The Hague - Cavusoglu 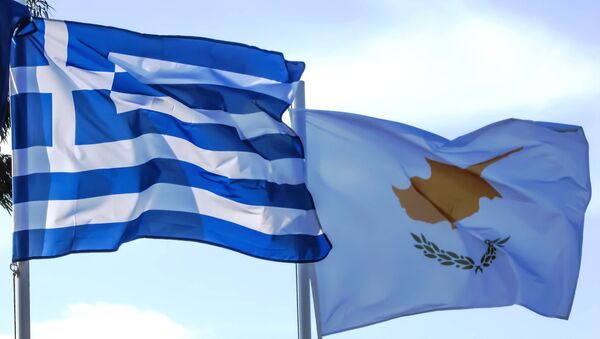 CC0 / Pixabay /
Subscribe
International
India
Africa
MOSCOW (Sputnik) - Turkey agrees with the spirit of the UN Convention on the Law of the Sea, but does not consider islands' right to the maritime zones automatic and is ready for dialogue with Greece on the issue of its exclusive economic zone (EEZ), Turkish Foreign Minister Mevlut Cavusoglu said in an interview with the Greek newspaper To Vima.

"Regarding the right of the islands to all types of maritime zones, it should be clear that we are talking about limited, not automatic, the law when we talk about maritime demarcation. Unfortunately, the Greek leadership and public opinion tend to ignore this fundamental rule," Cavusoglu said.

Cavusoglu said that a small island of 10 square kilometres (just over 6 miles) cannot have a continental shelf of 40,000 square kilometres (24,000 miles), and warned Greece against attempts to expand territorial waters to 12 nautical miles in the Aegean Sea. The foreign minister implied the peculiar status of Greece’s Kastellorizo Island, which is 340 miles away from Athens and hardly two miles off the Turkish coast.

As the Turkish minister noted, in the same way, if the length of the coastline of the islands in the demarcation area is minimal compared to the rest of the continental territory, these islands can only receive rights to territorial waters. Cavusoglu cited a number of examples of precedents and state practice between the United Kingdom and France, Libya and Malta, Tunisia and Italy and others.

"So it’s hard for us to understand the unfair Greek and Greek Cypriot statements that aim to limit Turkey’s rights to a narrow strip of maritime jurisdiction, despite the fact that Turkey has the largest continental coastline in the Eastern Mediterranean," Cavusoglu went on to explain.

Cavusoglu also reminded his interviewer that Turkey has not signed the UN Convention on the Law of the Sea, but respects its spirit at the level of principles and most of the provisions that comply with customary law.

The Minister did not rule out a joint trial between Greece and Turkey at the International Court of Justice in The Hague. According to him, the opportunity to resolve disagreements in The Hague was not discussed openly at the meeting of President Tayyip Erdogan with Greek Prime Minister Kyriakos Mitsotakis in London on the sidelines of the NATO summit, since this should be preceded by a negotiation process.

The foreign minister called the memorandum between Turkey and Libya "absolutely legal and valid."

"The Government of National Accord (GNA) is the only legitimate authority in Libya that can sign international agreements," Cavusoglu said and recalled signing similar agreements with other countries, for example, Italy in 2018 and 2019, the United States 2018 and 2019, with the European Union in 2019.

Northern Cyprus Will Allow Turkish Aircraft to Use Its Airport for Gas Drilling – Report
Asked about the possibility of regime change in Libya, Cavusoglu stressed that agreements between that two countries are not invalidated in the case of such an outcome.

On November 27, Turkey and the internationally recognised Libyan government based in Tripoli signed a memorandum that set a new maritime border that runs through a zone in the Mediterranean that Greece and Cyprus claim as theirs.