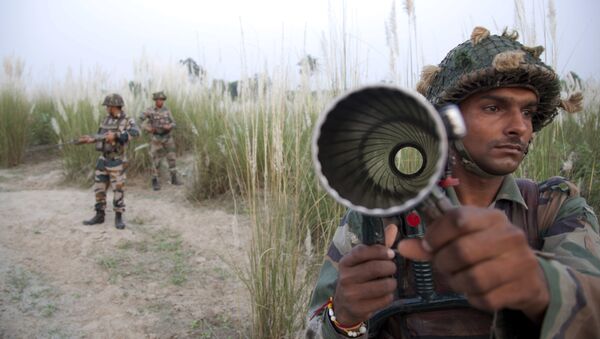 New Delhi (Sputnik): At least 40 Central Reserve Police Force (CRPF) personnel and the attacker died in a blast on a highway in the Pulwama area of Indian-administered Kashmir on 14 February. Responsibility for the attack was claimed by the Pakistan-based Islamist militant group Jaish-e-Mohammed.

The security forces in Jammu and Kashmir have foiled another Pulwama-like attack; they recovered an improvised explosive device (IED) which had been intended for use in an attack on army vehicles on the Baramulla-Uri highway on Sunday.

Initially, the personnel of the Road Opening Party found a suspicious object on Baramulla-Uri highway, after which, a bomb squad was called on the spot, according to reports.

Upon investigation, the bomb squad revealed that the suspicious object was an IED.

Earlier on Saturday, the security forces had seized an IED from Sopore in the Kupwara district of North Kashmir; security has been enhanced there ever since. The security agencies are aware that the terror outfits intend to target the army convoys again, a media report said.

This year in February, an attack on an army convoy in the Pulwama district of Jammu and Kashmir rocked the country. The attacker was Adil Ahmad Dar, a local from Pulwama district, and a member of Jaish-e-Mohammed. India has blamed Pakistan for the attack while Pakistan has condemned the attack and denied any connection to it.

Last February, a car carrying RDX explosives was rammed into a bus carrying security personnel. It caused a blast which killed over 40 CRPF personnel from the 76th Battalion and injured many others. It is stated to be the deadliest terror attack on India's state security personnel in Kashmir since 1989.

Investigations had suggested that the car was carrying more than 300 kilograms (660 lb) of explosives, including 80 kilograms (180 lb) of RDX, a high explosive, and ammonium nitrate.

The situation in Kashmir has been simmering since India's independence from British colonial governance and the simultaneous partition of India in 1947. Several rebel outfits are operating in the region, allegedly with support from Pakistan.