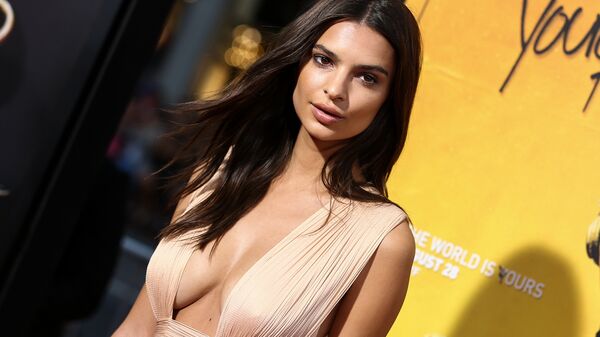 © John Salangsang/Invision
Subscribe
The Instagram model is a known patron of the fine arts, and, it turns out, is not above inserting her own image into timeless masterpieces.

Actress and model Emily Ratajkowski again inserted herself as a character from an object of the fine arts, uploading a picture of herself photoshopped into Johannes Vermeer’s 1665 painting ‘Girl with a Pearl Earring.’

In the digitally-altered image, the girl’s now-famous face is replaced by that of Ratajkowski, and the eponymous pearl earring is replaced by a Ratajkowski-branded ‘Figure Earring,’ shaped like a woman’s body, which is sold as part of the model’s Inamorata Woman line.

Girl with a Figure Earring @inamoratawoman

This is not the first time Ratajkowski inserted her image into works of fine art. Earlier in December, she posted a collage put together by Instagram user “radioshead,” which incorporated a nude Ratajkowski into Botticelli’s timeless The Birth of Venus.

Ratajkowski has asserted herself as a connoisseur of the fine arts, as her downtown Los Angeles loft is populated with pieces of modern art, according to Grazia. Among the paintings one can spot a screenshot of Ratajkowski’s own Instagram, with a shot from Sports Illustrated, in which the model wears a painted bikini.