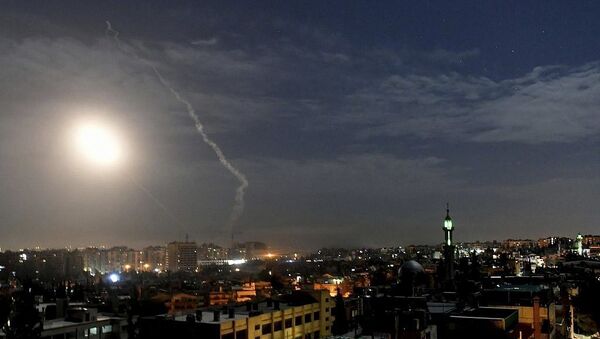 © Photo : Twitter / @4PawShop
Subscribe
Four cruise missiles were believed to have been launched through Lebanese airspace toward Syria, according to Reuters, citing an unnamed source. According to multiple media reports, the attack may have been initiated inside Israeli territory, however, the IDF has declined to comment.

According to a Sputnik correspondent, at least two large blasts occurred in Damascus at approximately 23:15 local time (21:15 GMT).

Israeli warplanes were in Lebanon’s airspace during an attack in Damascus, according to the source.

"Israeli planes were located in the Sidon and Jezzine area [southern Lebanon] when the information regarding the air attacks on Damascus was out," the source said.

The source did not specify whether these jets were involved in the attack.

Israeli Defence Forces (IDF) has declined to comment on the situation.

"We do not comment on reports in foreign media," the IDF said.

Netizens have shared videos of the alleged attack on social media.

Someone is lighting up the night sky with missiles, south of Damascus. Is Israel delivering a Chanukah present for Assad and Iran? pic.twitter.com/YBPrzEYDG9

Israeli Prime Minister Benjamin Netanyahu claimed that the Israeli attack targeted Iranian military positions in Syria and was in response to a shelling of Israeli territory from Syrian soil.

Israel has repeatedly accused Iran of trying to establish a permanent military presence in Syria, with the IDF conducting hundreds of strikes airstrikes against what they claimed were Iranian military targets in Syria, while Tehran argues that it has only been sending military advisers to Damascus to help fight terrorism.

Israel and Syria share a border along the disputed Golan Heights. The area has been mostly under Israel's control after Tel Aviv seized the territory during the 1967 Six-Day War, annexing the territory in 1981. Tel Aviv's legal gambit to annex the Golan Heights has been rejected by the United Nations.

The military conflict raging in Syria since 2011 significantly de-escalated this year, and the main priority of Damascus and the guarantors of the Syrian ceasefire - Russia, Turkey and Iran - is to ensure the safe return of refugees and a political settlement in the region.

000000
Popular comments
IRAN and RUSSIA do not allow IZRAHELL to Destroy SYRIA from now on.
Chamroosh
23 December 2019, 00:32 GMT6
000000
The Israeli aircraft that launched the missiles took off from Trump Heights in the Stolen Golan. Megalomaniac Zionist Trump is proud of it and will brag about it in his re-election campaign.