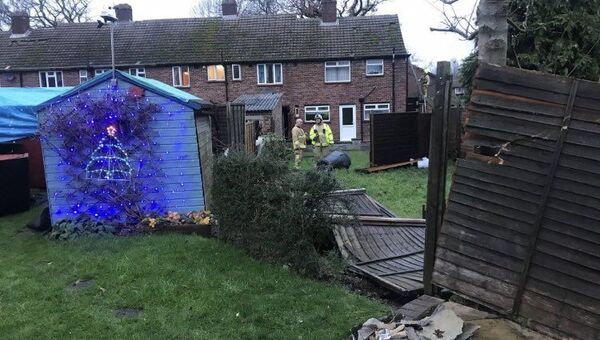 © REUTERS / Twitter / @mnrrntt
Subscribe
International
India
Africa
A witness said she feared for her life and that of her two young daughters who were screaming inside the suburban house, thinking it was going to fly away like in the American musical fantasy film 'The Wizard of Oz.

At least 20 houses were damaged and 10 cars destroyed in Surrey County, in the southeast of the United Kingdom, on Saturday by a tornado hitting the area, local media reported.

The terrifying tornado, which lasted for less than a minute, caused destruction to roofs, gardens, trees and cars, taking “everything in its path”.

“It was really frightening, like nothing I've ever seen in my life - like we weren't in the UK. My girls were screaming. If they were outside it would definitely have taken them away. It was fierce. At one point I thought it was going to take the house. It was literally taking everything in its path,” said Pip Rickerby, 39, who witnessed the incident, cited by The Sun.

A weak #tornado had struck to hit Surrey U.K. this morning. The EF1 tornado has winds of 90-100mph, bringing significant damage to trees, fences and peel some shingles off the roofs. pic.twitter.com/G7QXvUJWnl

Another woman, Tracy Bramley, who was inside her car during the tornado, said that she a hole was punched in the roof of her auto.

"I was sat in my car at the time, it all changed really quickly, it started to whip up, I could feel my car beginning to rock a bit, it just came a bit out of nowhere really,” said Tracy Bramley, cited by The Sun.

Crews from Surrey Fire and Rescue have also been sent to reports of a tornado hurtling through Ottershaw.
More than 20 homes suffered damaged roofs and 10 cars were struck by falling tiles on one estate, where fences and trees were also brought down.@piratefm@Evotekmarine pic.twitter.com/bnBbfpA2YX

A tornado hit Surrey and this is the highlight of the article imo.

"A trampoline was also knocked over" pic.twitter.com/gEAf0Obld3

3 fence panels and a bin pic.twitter.com/AtqLiYudIB