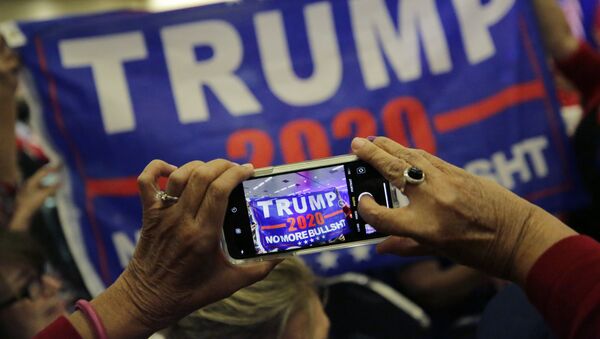 Egor Efimchik
All materials
Donald Trump’s impeachment process is stretching into the final year of his presidential term, overlapping with his re-election campaign. The Democrats and Republicans are at odds over rules that will govern the Senate trial, and it is still unclear where that process will be resumed.

Only the 3 November election will definitely demonstrate who were the winners and losers of Donald Trump’s impeachment. Observers are already making bets, however, and many suggest that the impeachment gambit will backfire on Democrats.

A bad choice of charges?

“As a political process, the duty of the party that leads an impeachment process has a duty to build something close to a national consensus in order to make it a serious process,” says Ted Rall, a New York-based columnist and political cartoonist.

“Clearly, that has not happened here. President Trump is being impeached along a party-line vote in the House of Representatives and will be spared conviction in the Senate by another party-line vote.”

The Republicans have already said they would exonerate the President in a Senate vote. The Democrats could score big if they galvanised the public on some hot-button issue. This doesn’t appear to be the case now.

“Democrats are only impeaching the president on a very narrow issue, his phone call to the president of Ukraine,” Ted Rall explains. “Previous impeachments were broader, encompassing a swath of issues. Very few Americans have any opinion about, much less care strongly about the Ukraine issue.”

“Also, the choice of issues is important. You need to go after the president based on scandals that will cause outrage among both Democrats and Republicans. Corruption, child separation at the US Mexico border, emoluments would have been better places to start if you were trying to get Republicans as well as Democrats to support this process.”

He suggests that the impeachment is a “pro-forma” step which will enable House Speaker Nancy Pelosi and her party to say that they impeached Trump without doing the “heavy lifting”, i.e. going to the trouble of compelling key witnesses to testify (several high-ranking figures, including Trump himself, his attorney Rudy Giuliani, Vice President Mike Pence and Secretary of State Mike Pompeo, refused to appear in the House).

“It’s a political and tactical mistake for the Democratic Party and it will do damage to the US system of government,” Rall concludes.

There is still no specific date set for a Senate trial, which for the time being is expected to start in January. Nancy Pelosi this week floated the possibility of delaying the necessary step of sending over the articles of impeachment to senators for an indefinite period of time.

The Democrats want a high-profile trial for Trump, which would include testimony from Acting Chief of Staff Mick Mulvaney and former National Security Adviser John Bolton, and see documents the White House has withheld. The Republicans want an immediate trial without any new witnesses.

Thomas Knapp, director and senior news analyst at the William Lloyd Garrison Center for Libertarian Advocacy Journalism, says Pelosi could be holding onto the articles of impeachment to pick the most comfortable timing.

“The other [reason] is just to let the articles sit there with no trial at all, thus denying Trump an ‘acquittal’ in the Senate,” Knapp theorises. “He would then be the only president to be impeached but not acquitted.”

“Personally, I think both those reasons are bad ones. The only way this ends well for Democrats is if the Republicans grandstand in the Senate trial and more people notice that they don’t care about the facts or the evidence.”

He believes the scandal has already hurt the Democratic Party and boosted Trump’s chances of getting re-elected significantly: “Before the impeachment inquiry began, I gave him a 5 percent chance of re-election. Now I‘d say his odds are much better, perhaps approaching 50 percent.”

“Before impeachment, the only real question was ‘will the Democrats nominate someone more popular and more competent than Hillary Clinton?’ That would have been an easy bar to get over. But now, with impeachment, the question becomes ‘which party is more seen as just playing political games with impeachment?’ We haven’t learned the full answer to that question yet.”