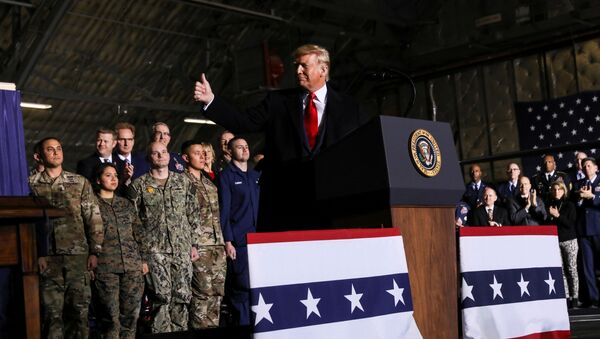 The 2020 National Defence Authorization Act (NDAA) envisages, among other provisions, the establishment of a US Space Force and includes $71.5 billion to pay for ongoing foreign wars or what the US government describes as "Overseas Contingency Operations".

On Friday, Trump enacted the NDAA, launching the United States Space Force as a sixth branch of the US Armed Services.

Trump has repeatedly promised to establish the sixth branch of the US military - dubbed SPACECOM - saying it would defend the country’s interests in space. According to a Trump statement, it is important to militarize space so as to be able to detect and destroy a missile launched against the United States.

The NDAA also includes sanctions against the Nord Stream 2 gas pipeline, Turkey and Syria along with a range of other measures.

In particular, the bill calls for mandatory restrictions on the Nord Stream 2 and the TurkStream pipelines, and bars military-to-military cooperation with Russia. The bill also sanctions Turkey over its acquisition of Russian S-400 air defence missile systems and prohibits the transfer of F-35 jets to Ankara.

The NDAA includes other efforts to counter Russia in Eastern Europe such as prohibiting the United States from recognizing Crimea's decision to rejoin Russia, increasing funding for the European Defence Initiative – additional $734.3 million – for military construction and anti-submarine warfare.

The military budget also supports the extension of the New Strategic Arms Reduction Treaty (New START) from its termination date in February 2021 to February 2026 in accordance with the law. It also requires the US president to determine and inform Congress if Russia violates the treaty.

Furthermore, the bill requires the United States to supersede the New START Treaty with another arms control agreement that provides equal or greater constraints, transparency and verification of Russia's nuclear forces.

The NDAA also requires increased testing of US missile defence systems, specifically with regard to countermeasures. It also supports the US efforts to develop a hypersonic weapon capability by the mid-2020s.

The bill also makes the Defence Department – 120 days after the NDAA goes into effect – provide Congress with a report on military assistance provided by Russia or any Russia-based private security contractor to African countries. It also requires an analysis of any alleged Russian disinformation and propaganda in African countries that may pose a risk to US interests in the region. The document also points out the need to develop a plan to counteract "destabilizing Russian activities" in Africa.

The spending bill requires a report on arms sales in Africa that may be in violation of UN-imposed arms embargoes, especially in South Sudan, the Democratic Republic of the Congo and the Central African Republic.

Swiss Entity Participating in Nord Stream 2 Suspends Gas Pipeline Construction Due to US Sanctions
Trump has been an ardent supporter of the bill and has urged Congress to pass the legislation so he could enact it immediately before funding for the Pentagon expires on 20 December.

The defence spending bill also renews the $300 million in US security assistance for Ukraine, which includes $100 million for lethal weapons. The legislation also expands the types of aid that Ukraine can receive to include coastal defence cruise missiles and anti-ship missiles.

The bill also requires providing reports on the threats posed by China and military relations with Russia, and proclaims that Congress unequivocally supports Hong Kong in the region's attempts to retain its autonomy.