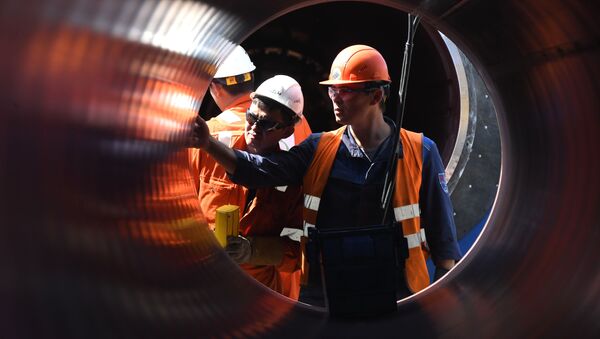 Earlier in the day, Russian Foreign Ministry spokeswoman Maria Zakharova commented on new US sanctions against the Nord Stream-2 and Turkish Stream pipelines, saying that the state, with its historically unprecedented debt, forbids others from developing their economies.

Nord Stream 2 AG vowed on Saturday to continue working with partners to complete the pipeline after Swiss-based Allseas Group S.A. said in a statement earlier this day that it had suspended its commitments to the landmark European energy project due to possible US restrictions.

Speaking further, the company stressed the importance of the gas pipeline project for Europe's energy security.

"The completion of the project is of an extraordinary importance to the energy security of Europe. We, together with the companies committed to the project will be working to complete it as soon as possible," Jens Müller, the company's representative said.

On Friday, US President Donald Trump signed the $738 billion National Defense Authorisation Act (NDAA) that includes sanctions against the Nord Stream 2 gas pipeline, Turkey and Syria along with a range of other measures.

Nord Stream 2 Sanctions Reflect How US, Despite $22 tn Debt, Stops Others From Developing - Moscow
Later the same day, the US Treasury Department issued an explanation, stating that US sanctions against the Nord Stream-2 and Turkish Stream pipelines took effect immediately and that the US was demanding construction companies to stop their work.

The 745-mile-long twin pipeline will carry up to 55 billion cubic meters (1.942 trillion cubic feet) of gas per year from Russia to Germany through the territorial waters or exclusive economic zones of Denmark, Finland, Germany, Russia and Sweden.