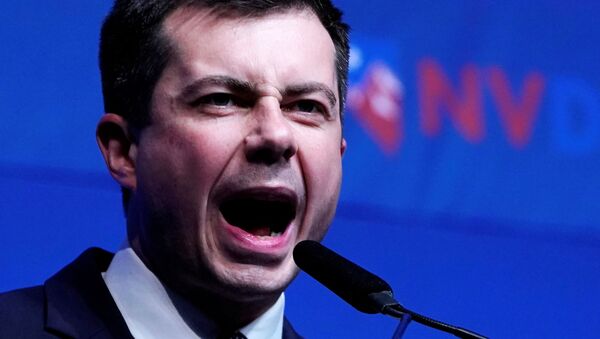 © REUTERS / CARLO ALLEGRI
Subscribe
South Bend, Indiana, Mayor Pete Buttigieg was the subject of great criticism during the sixth Democratic presidential debate Thursday - backlash he should have been subjected to a long time ago, Ben Norton, a journalist with The Grayzone and co-host of the Moderate Rebels podcast, told Sputnik’s Loud & Clear Friday.

During the debate in Los Angeles, California, Buttigieg was criticized by Sens. Elizabeth Warren (D-MA) and Bernie Sanders (I-VT) for holding a recent fundraiser in a wine cave in California’s Napa Valley decorated with a chandelier containing 1,500 Swarovski crystals.

“Billionaires in wine caves shouldn’t choose the next president of the United States,” Warren said during the debate.

Buttigieg has also faced backlash for his two-year employment at American consulting firm McKinsey, which has a history of highly unethical behavior. According to a report by Vox, McKinsey helped drug company Purdue Pharma increase opioid sales during the opioid crisis; a report by the New York Times earlier this month also revealed how the consulting firm advised US Immigration and Customs Enforcement (ICE) to cut government spending on food and medicine for migrants as well as encouraging the detainment and deportation of immigrants.

“I’m glad to see people finally pushing back against this guy, who, we’ve talked about before, is very suspicious in many ways and frankly, I’ll go so far as to say, somewhat borderline sociopathic when you look at some of the past potential activities he’s been involved it at McKinsey, some of the intelligence work he’s done,” Norton told hosts John Kiriakou and Brian Becker.

“Just look at his demeanor: this is a guy, for instance, who only won 8,000 votes and now has been propelled to … a platform that has been entirely created by the corporate media. My colleague, Max Blumenthal, published an article looking at [how] since the moment he graduated from Harvard, he has been cultivated by this network of regime-changers,” Norton said.

“One of his closest friends and colleagues, Nathaniel Myers, helps oversee the Office of Transitional Initiatives at USAID [United States Agency for International Development], which is basically a CIA cutup overseeing regime-change operations at McKinsey,” Norton noted. “The latest scandal is that Buttigieg was likely involved in a bread price-fixing scandal in Canada.”

“There’s just so many layers of ridiculous behavior: where he was also involved, for instance, we now know, in an attempt to privatize the US Postal Service, and he was part of the team that recommended replacing the unionized labor with non-unionized labor. He also said that they should boost the number of hours in the work day. Essentially this guy is [part of a class of] corporate consultants that … don’t have any feelings for workers,” Norton said of Buttigieg’s time at McKinsey.

“Their idea is they want to just force more productivity out of them while paying them less and less. This is a guy who should be criticized, and finally it’s good to see that he was criticized for his, you know, his big-money donors meeting in ‘Wine Cellar Cave,’” Norton added.

“He’s an attempt to rebrand that same kind of ultra-capitalist politics but in the new era,” Norton said of Buttigieg. “He’s in his 30s. This is a guy who like [former US President Barack] Obama is all symbol and no substance. He has a program that is going to hurt gay people, hurt working class people, hurt people of color, and that’s not even to mention really quickly his foreign policy.”

“We also saw that he and Biden and others were calling for much more aggressive actions against China, which is part of this new Cold War. So when it comes to foreign policy, Buttigieg is entirely a product of this military industrial complex, of this imperialist war machine. He worked at a pro-war, neoconservative think tank. When you look at every single issue, Buttigieg is offering more of the same status quo that has brought us to this point of creating Donald Trump,” Norton explained.