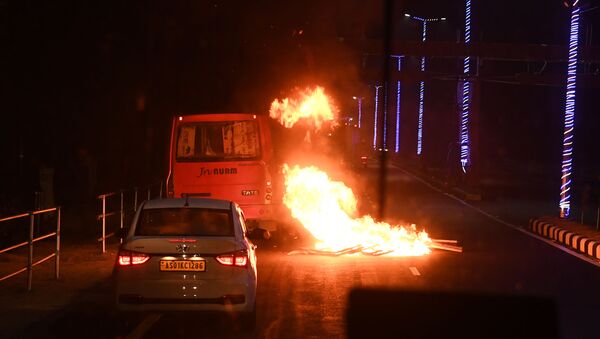 New Delhi (Sputnik): In spite of stringent measures taken by the central government and police in India to curb ongoing protests taking place throughout the country over the controversial Citizenship Act, the demonstrations became violent in several parts of the country, resulting in deaths and arson attacks.

Delhi police confirmed on Saturday that 15 arrests have been made and around 40 has been detained in connection with violence in Daryaganj, a neighbourhood of Delhi, where a private vehicle was torched outside a police station. The arrested will appear in court later in the day.

In the Indian state of Uttar Pradesh alone, 11 people were killed in three days of violent clashes with police, including an 8-year-old child. Thousands have been detained and official complaints have been registered against 10,000 people in the state.

Four of those who lost their lives were reportedly from the Meerut district of Uttar Pradesh and the child was crushed to death in a stampede in the ancient city of Varanasi. There are reports of gunfire in the city; six policemen sustained injuries, one of whom is in hospital in critical condition.

Since the passage of the Citizenship law, people throughout the country have taken to the streets in protest, as opponents of the law claim it violates constitutional guarantees singling out members of a certain ethnic group in the formally secular country on religious grounds.

In Delhi, at least 45 people have been injured including 13 police officers.

Water cannons were used in the Daryaganj area to disperse the massive crowds of some 6,000 protesters. Police had to resort to baton-charging on people as mob responded with stone-pelting.

Yesterday, a massive police force was deployed throughout Delhi where protests were taken out against the citizenship law. Situation turned violent after the Friday prayers in historic Jama Masjid in old Delhi and continued till late evening.