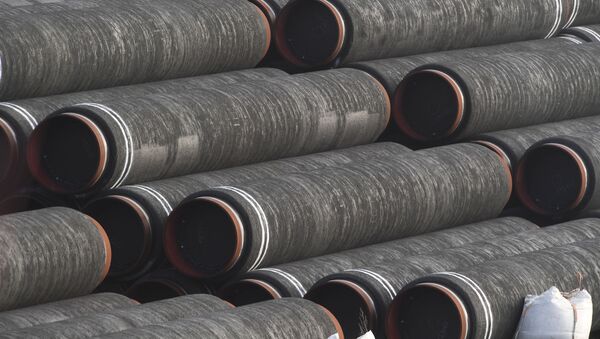 © AFP 2021 / STEFAN SAUER
Subscribe
BRUSSELS (Sputnik) - On Tuesday, the US Senate passed a $738 billion defence bill for 2020 fiscal year that, in particular, calls for mandatory sanctions on Russia’s Nord Stream 2 and TurkStream pipelines. The bill is yet to be signed into law by President Donald Trump, who has already promised to do that without delay.

A new US defence bill that threatens sanctions on companies involved in the Russia-led Nord Stream 2 project has caused an uproar in Berlin, yet nobody doubts that the pipeline will be finished, despite the Americans' last-minute attempt to stop it.

Germany, the main beneficiary of the project, has swiftly condemned the sanctions as "unacceptable."

"European energy policy is decided in Europe, not the US. The American sanctions on companies building the Nord Stream 2 gas pipeline are unacceptable because in the end they amount to interference in autonomous decisions made in Europe," German Foreign Minister Heiko Maas said on the ZDF TV channel.

Speaking at the Bundestag a day after the Senate vote, Chancellor Angela Merkel confirmed that Berlin strongly opposed US extraterritorial sanctions in principle and intended to "decisively" discuss the matter with her US counterparts.

GAS WAR IS ABOUT BUSINESS

The gas row between Europe and the US is not new. According to Nina Bachkatov of Belgium’s Liege University, the US opposition to Russian gas projects is actually based on two pillars - "geostrategic games and commercial interests."

"The United States has always denounced the so-called energy dependence of Europeans towards the USSR. See in particular the campaign under [former US President Ronald] Reagan against the first pipeline bringing Russian gas to Western Europe … After a brief pause during the 1990s, we found ourselves in the same equation: the United States, which ensures European security, cannot accept what they consider a threat to European security by Russia that could ruin the European economy by cutting off the deliveries," Bachkatov said.

Yet, now the fight against Russian projects has a new element as the US has also become an energy producer and is "looking for markets to sell their liquefied gas to Europeans," she said.

The NATO summit in July 2018, for example, saw a very telling standoff with this regard, when Trump had bluntly told Merkel, in front of the whole press, that he did not see why the US had to finance the defence of Germany, while the latter was making Russians richer by buying their gas.

Clearly the US push did not stop at that. The US administration has since stepped up pressure on Berlin to abandon the Nord Stream 2 project, arguing that it would make Europe energy-dependent on Russia.

Russia, in turn, wants Nord Stream 2 and TurkStream to be ready as soon as possible since its long-term gas transit contract with Ukraine expires on December 31, while the hard work on a new one is still underway.

The Nord Stream 2 is a joint venture of Gazprom and five European companies. In total, some 627 firms are involved in building the Gazprom-led Nord Stream 2 pipeline, including two pipelaying companies — Swiss-based Allseas Group S.A. and Italy's Saipem. The tube's final offshore stretch is nearly completed at the bottom of the Baltic Sea, and Denmark has finally given a green light to the construction of a section of the pipeline in its waters. The pipeline is set to become operational in early 2020.

Formally, the US is imposing sanctions because – as Republican Sen. Ted Cruz put it – "the bill will safeguard Europe's energy security and prevent Moscow from obtaining billions of dollars that could be used to fuel Russian aggression."

Many yet believe that Americans, in the first place, seek to sell Europe its own gas produced in the US from shale gas deposits, which is then liquefied at very low temperature and forwarded by gas tankers to European ports, such as those already functioning in Poland and Lithuania. This viewpoint has been backed in the German press by the chairman of the Russian-German Chamber of Commerce, Matthias Schepp, who said that the US only wanted to sell its more expensive LNG and "push competitors out of the European market."

Kremlin spokesman Dmitry Peskov has similarly called US sanctions an "example of unfair competition," which is "not welcome in Moscow, nor in Berlin, nor in Paris." According to the Kremlin, "the project will be completed" despite the restrictions.

Not every expert, meanwhile, agrees that the Nord Stream 2 project is as necessary as the German government argues.

Professor Claudia Kemfert, the head of the Energy, Transportation, Environment Department at the German Institute for Economic Research (DIW Berlin), believes that "the construction of the second pipeline via the Baltic Sea is "very controversial for political, energy and ecological [reasons]."

"The project operator and some European energy supply companies argue that it is a private, profitable investment project necessary for the security of supply of Germany and Europe with natural gas. But our analyses at DIW Berlin show that the planned pipeline is not necessary in Germany and Europe for the security of gas supply. The EU reference scenario significantly overestimates the German and European natural gas requirements," she said.

According to Kemfert, there will be "no supply gap" in Europe if Nord Stream 2 is not activated.

Its implementation, in contrast, "might incur high losses," up to billions of euros, the expert said, citing "different profitability calculations."

In addition, the EU’s climate protection targets for 2030 and 2050 are expected to entail a drop in natural gas demand in the electricity, heating sector and industry – all this makes the assumptions of Nord Stream consortium "doubtful," Kemfert concluded.

EX-EU OFFICIAL: NO WORRIES, SANCTIONS WILL HAVE NO EFFECT

Samuele Furfari, a former European Commission official in charge of energy issues and now a professor in Free University of Brussels, however, disagreed with the assessment that "green" Europe would soon no longer need natural gas.

"I don't think there will be a glut in natural gas or LNG in Europe. Most Western countries have made the wrong choices in terms of renewables, especially Germany which has – because of these choices – become the largest emitter of CO2 in the EU. All the capacity they install in terms of wind turbines or solar panels will need to be accompanied by the same capacity in gas or fuel or coal. It will be gas of course, with less CO2 emissions, and that will support the demand, especially as nearly none of the European countries is fulfilling its ‘objectives’ for 2020 or 2030," Furfari said.

As for US sanctions, the ex-EU official expressed confidence that they would have no "effect," recalling that European companies were among the project’s key stakeholders.

"NS2 (Nord Stream 2) will be completed. It is already well advanced. Mr [Maros] Sefcovic, when in charge of EU security of supply, opposed the Nord Stream project because he is Slovak [and was afraid of the loss of transit costs for his country.] Now that he is no longer in that key position at the European Commission and it is a German who heads that department, do not worry about finishing this pipeline. Sanctions will have no effect," he said.

Summing up, the US "gas war" will unlikely produce great results, except maybe for the American suppliers of liquefied gas as Germany is also building an LNG terminal.