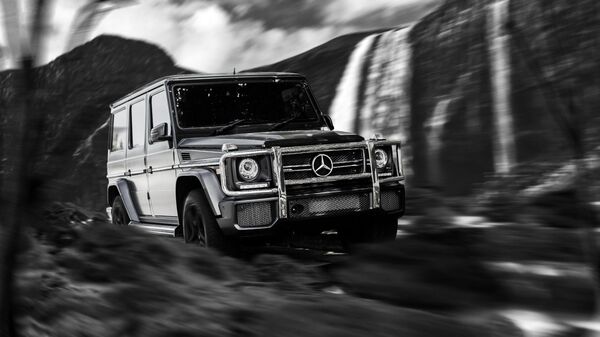 Ilya Tsukanov
All materialsWrite to the author
The incident, which took place in Russia’s Karelia, was caught on camera and spread on social media.

A pair of Muscovites including local blogger Igor Moroz carried out an unusual stunt, renting a Mi-8 transport helicopter fitted with a winch, attaching a Mercedes Gelandewagen (G-Class) luxury SUV and dropping it from a height of 300 meters.

The publicity stunt was caught on camera. Moroz claimed that he bought the SUV two years ago, but became disappointed over its poor quality, saying he’s been forced to repair it as often as once a month amid constant breakdowns.

The vehicle appeared to be fully functional before the drop, shown drifting in the snow. However, inquisitive commentators on Moroz’s YouTube channel suggested that the G-Wagon that was dropped and the one showed driving around weren’t the same, and that the blogger has switched the more expensive SUV out for a cheaper clunker model.

After an eight second descent, the SUV was flattened into a pancake, and taken off to be scrapped.

According to local media, Karelia’s transport police are now conducting a probe into the incident, and the blogger may receive a fine.