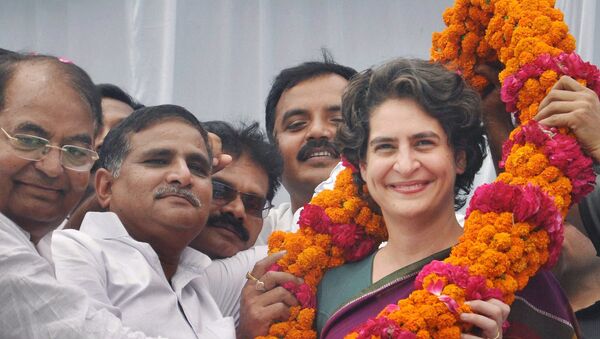 Sputnik (New Delhi): Since the passage of the Citizen Act in Parliament, India’s main opposition party has launched a strong protest against it labelling it discriminatory and against the spirit of Indian democracy. Earlier this week, the Congress chief took a multi-party delegation to the Indian President to seek the Act’s withdrawal.

In a televised address on Friday, Congress chief Sonia Gandhi said: “There have been spontaneous protests at universities, the Indian Institute of Technology (IIT), Indian Institute of Management (IIM) and other leading academic institutions against the divisive agenda and the anti-people policies of the BJP government. In a democracy, people have the right to raise their voices against the wrong decision of the government, and register their concerns.”

Gandhi said the BJP government has shown utter disregard for people’s voices and has chosen to use brute force to suppress dissent. “This is unacceptable in a democracy. The congress party condemns the actions of the BJP government and expresses solidarity with the people, Gandhi added.

The statement holds significance as it came on a day when Muslim protests were witnessed across the country against the Act. Also, it comes a day after the city saw sporadic protests in various parts, despite prohibitory orders by the administration.

On Friday evening, ongoing protests against the CAA once again witnessed violence. They occurred in the Darya Ganj area where a lot of protestors were present, near the city’s biggest mosque- the Jama Masjid, with crowds holding daily prayers and a collective demonstration. These people had come from the city’s other Muslim-dominated parts like Zafarabad and Seelampur for the meetings.

Gandhi led a joint opposition front on Tuesday to meet Indian President Ram Nath Kovind and demanded the withdrawal of the controversial Citizenship Law. Urging the president to “intervene” Gandhi, who led a 12-party delegation amid country-wide protests against the Law, called the situation “very serious”.