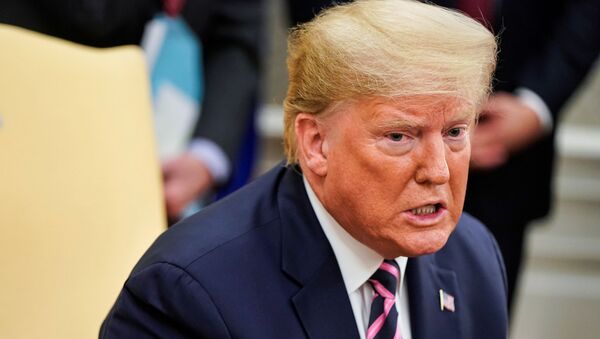 © REUTERS / JOSHUA ROBERTS
Subscribe
On Wednesday, the US House of Representatives voted to impeach President Donald Trump on charges of obstruction of Congress and abuse of power, making Trump the third US President in history to be impeached.

Donald Trump tweeted Thursday, in an apparent response to US House Speaker Nancy Pelosi's purported indecisiveness on when to continue with the president's impeachment trial in the US Senate, that he wanted "an immediate trial".

Trump claimed Democrats gave him "no Due Process in the House, no lawyers, no witnesses, no nothing", while accusing them of "trying to to tell the Senate how to run their trial".

So after the Democrats gave me no Due Process in the House, no lawyers, no witnesses, no nothing, they now want to tell the Senate how to run their trial. Actually, they have zero proof of anything, they will never even show up. They want out. I want an immediate trial!

The US president suggested that Republicans "have never been so united", while Democrats failed to "get even a single vote" from GOP members in the House.

The House Democrats were unable to get even a single vote from the Republicans on their Impeachment Hoax. The Republicans have never been so united! The Dem’s case is so bad that they don’t even want to go to trial!

Earlier in the day, US Senate Majority Leader Mitch McConnell met with Democratic Minority Leader Chuck Schumer to discuss the ground rules for Trump's impeachment trial in the Senate.

"This afternoon, my friend the Democratic leader and I had a cordial conversation, we discussed potential paths forward following the House Democrats' precedent-breaking impeachment of President [Donald] Trump... as of today however, we remain at an impasse," McConnell said during remarks on the Senate floor on Thursday.

"The next thing for us will be when we see the process that is set forth in the Senate, then we'll know the number of managers that we may have to go forward and who we will choose," Pelosi said.

Asked at a press conference after the vote regarding when the choice would be made, Pelosi would not commit, saying she was waiting to see "what they are doing on the Senate side," referring to Senate Majority leader Mitch McConnell’s announced intention to acquit the president.

Trump is the third president in US history to be impeached following Democrats - who control the House of Representatives - voted on Wednesday that he was guilty of abuse of power and obstruction of Congress, after investigations concluding that he invited foreign meddling in the US electoral process.

The president must now face trial in the US Senate but, even after the expected heated debate, it is unlikely that Trump will be removed from power, as the top US legislative body is controlled by members of the Republican party who have made it clear that they will allow the president to stay in office.

000000
Popular comments
'I Want Immediate Trial': Trump.....Done...! Come to senate tomorrow, testify and get your vote tomorrow afternoon...! Done before Christmas...!!!
netman
20 December 2019, 05:42 GMT1
000000
Trump, you best read your Constitution, the Dems are doing your Impeachment by the book and the longer it makes you squirm the happier the world is you mindless insufferable Pig!