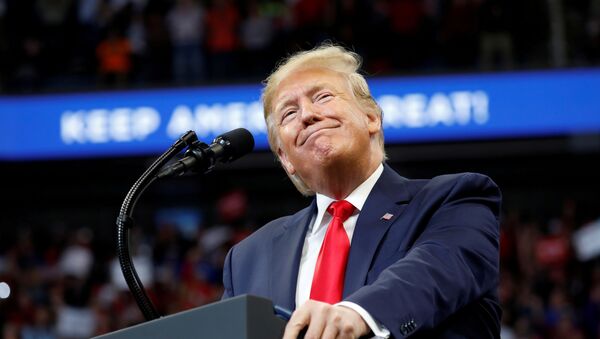 The new nickname, reflecting the most recent developments regarding the Oval Office, was quickly adopted by Trump critics on social media.

Conservative attorney George Conway, the husband of White House senior counselor Kellyanne Conway, came up with a new nickname for US President Donald Trump on Thursday, which skyrocketed to the first position in Twitter trends by Friday.

“Okay, you want a hashtag, you got it. #IMPOTUS,” he tweeted.

​The popular new nickname appears to be a combination of “impeachment” and POTUS – an acronym commonly used in the US for ‘President of the United States’.

The new hashtag quickly went viral, as a number of Trump critics adopted it for their tweets.

“100% on board with this. I came up with #Imp45 but #IMPOTUS is better,” tweeted Pam Keith, a former Democratic House candidate.

“#IMPOTUS told me that you can’t impeach a president for doing the best presidenting ever. Guess he was wrong,” another user wrote.

how can he be #IMPOTUS and still screw everyone all the time? It's a uniquely strange version of #ElectileDysfunction

​On Friday, Conway saw his artful conflation take the number 1 spot on Twitter.

On Wednesday, The US House of Representatives impeached Trump. Since the process has passed the Dem-controlled House, Trump is officially considered to have been “impeached”. This does not mean, however, that he will necessarily be removed from office; as an actual firing of a president is decided by a subsequent vote in the currently GOP-controlled Senate.

Was it Electoral Dysfunction?

​The vote, when it occurs, is expected to fall along party lines, guaranteeing that the president will remain in the Oval Office at least until the 2020 election.

How in the good Lord’s name are you and your wife able to live in the same house? #impotus