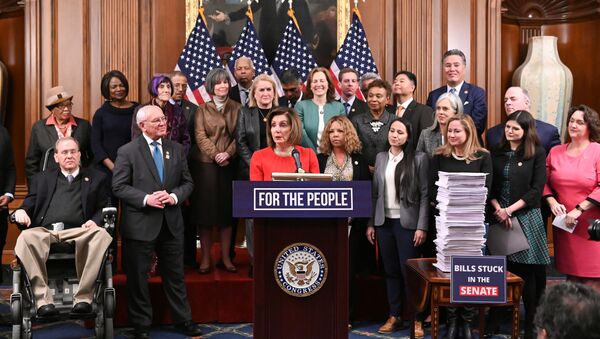 On Wednesday, Trump became the third president in US history to be impeached when the Democratic-controlled House of Representatives voted to find him guilty of abuse of power and obstruction of Congress after investigations concluding he invited foreign meddling in the American electoral process.

"The impeachment circus is a political act by the House Democrats. It is a political orchestration without any evidence or credible testimony," Roberts said. "What is disturbing about the impeachment… is that these orchestrated actions are an attempt to overturn a democratic election. The US now engages in actions against its own population like the actions Washington recently engaged in against Venezuela, Bolivia, Honduras, and Ukraine."

The Democratic Party, Roberts added, decided to fabricate a scandal with Ukraine after Russiagate fell apart.

"The Democrats are after power. They were frustrated by the Russiagate failure, and orchestrated a hoax that, even if it were true, would not be an impeachable event," he said.

Roberts continued to say that the House Democrats are able to "get away with this hoax" because the American media is against Trump.

"It is disturbing also because it demonstrates that there is no integrity in the media or the security agencies," he explained. "Without the support of the media and security agencies, the Democrats would not be able to orchestrate such obvious hoaxes."

Roberts believes that the impeachment proceedings are not hurting Trump's election chances, and even help him.

"As the impeachment proceedings unfolded, the public turned against the proceedings, recognizing them as a purely political action," Roberts said. "The Democrats hoped that some of the mud would stick to Trump and reduce his reelection chances, but it seems the impeachment is helping Trump."

The president will have to face trial in the US Senate but is unlikely to be removed from power as the higher legislative decision-making body is controlled by members of his Republican party, who have made it clear that they viewed his impeachment as a sham.

"The Senate will not convict Trump of the charges, unless enough Republican senators can be blackmailed by the FBI, CIA, and NSA, police state institutions that have spy folders on everyone, or unless the military/security complex can bribe the Republicans with large sums of money to vote against Trump," Roberts said. "I think this is unlikely as it would be too obvious even for insouciant Americans not to notice."

Roberts also said that Russiagate and the impeachment "have radicalized" and divided the United States.

"The population is now split in a new way. On the one hand we have the people who elected Trump, ordinary traditional Americans now demonized as "racists" and "white supremacists," Roberts said. "On the other hand we have the Democrats, no longer the party of the working people."

House Democrats launched their impeachment inquiry in September to probe whether Trump tried to pressure Ukraine into investigating his political rival Joe Biden, the current Democratic front-runner in the presidential primaries. Lawmakers initiated the inquiry after a whistleblower sent a complaint to the Congress claiming that Trump threatened to withdraw military aid for Ukraine if Kiev failed to investigate Biden and his son Hunter over the latter's business dealings in the country.

Commenting on Wednesday’s vote, the president said that "this lawless, partisan impeachment" was "political suicide" for the Democratic Party. He also expressed confidence that he would be fully exonerated by the Senate, pledging to "continue to work tirelessly to address the needs and priorities of the American people."