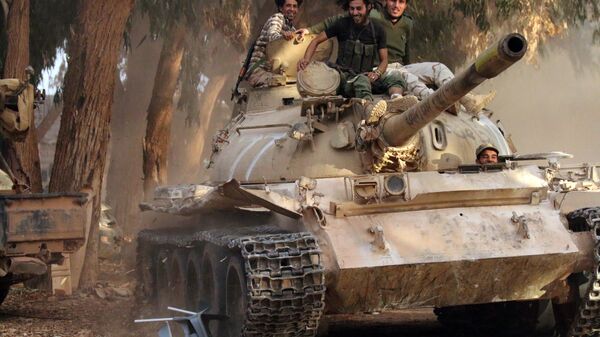 Ilya Tsukanov
All materialsWrite to the author
Tripoli has faced months of intense fighting between the Government of National Accord (GNA) and the Libyan National Army (LNA), with the two competing factions emerging in the aftermath of a NATO-led bombing campaign which helped to topple Libyan leader Muammar Gaddafi in 2011.

“The strikes on Misrata will continue intensively non-stop both day and night if [the Misratan militias] do not withdraw their forces from Tripoli and Sirte within three days at the latest. The withdrawal deadline is 12:00 am on Sunday night,” Al-Mismari said in a press release.

The powerful Misrata militias, hailing from the coastal city of Misrata, about 200 km southeast of Tripoli, have been fighting on behalf of the LNA government, one of the two competing governments vying for control over the war-wracked country in recent years.

The mobilized troops from Misrata arrived in Tripoli. GNA goes for all or nothing. pic.twitter.com/3k6Vb3hDjd

The Libyan National Army, owing its allegiance to the Tobruk-based government, began an offensive on Tripoli in April, leading to months of heavy fighting. Earlier this week, LNA spokesman Al-Mundhir Al-Khartoush boasted that LNA troops had “made excellent progress” in fighting for the capital.

On Friday, an LNA military source claimed that Turkish troops were spotted among the GNA’s ranks. Earlier, Prime Minister al-Sarraj had ratified an military cooperation agreement with Ankara. The reports of Turkish forces engaged in fighting have yet to be independently verified.

Last week, the UN warned that external interference in the war in Libya was growing, with various countries providing technical and military assistance to the opposing parties.

The April offensive began after the breakdown of peace negotiations between the LNA and the GNA. The leaders of the two factions have subsequently called one another “terrorists” and “renegades” and refused to recognise one another’s legitimacy.

Once one of the most prosperous and secure countries in Africa and the Middle East, Libya descended into a civil war in 2011. During the war, armed militants supported by NATO air power successfully defeated government forces loyal to Muammar Gaddafi. In the years since, the country turned into a failed state, rife with competing militias, criminal gangs and terrorist groups which have taken over wide swathes of the country. The country subsequently became a major hub for the flow of refugees from Africa to Europe.

In his marathon year-end press conference on Thursday, Russian President Vladimir Putin confirmed that Moscow has been keeping in touch with both of Libya’s competing governments, and stressed that “the right thing to do is to find a solution which will stop the hostilities.”

Last month, the five leaders of the BRICS group of nations called on all parties to immediately cease all military action and to engage with the UN, the African Union and other stakeholders in peace negotiations.