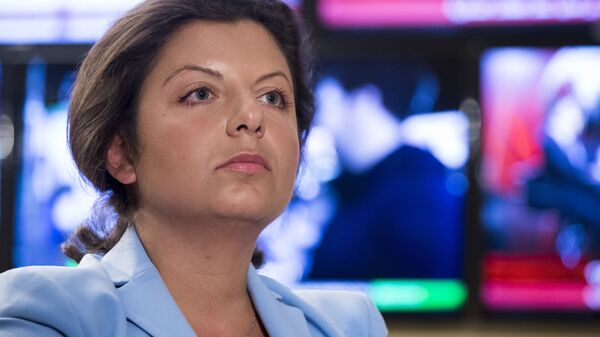 MOSCOW (Sputnik) - Sputnik and RT editor-in-chief Margarita Simonyan has called on Estonian President Kersti Kaljulaid in Estonian to prevent the arrest of Sputnik Estonia employees after they have been warned of possible criminal prosecution over their work.

"I know that relations between our countries deserve being better. We know that you are ready for a calm dialogue, and we appreciate you for this. But just like you we do not want to feel ashamed of Estonia. Let us prevent this together," Simonyan said on Thursday in a statement, released on Facebook in Estonian and in Russian.

Simonyan said she did not know whether Kaljulaid was fully aware of the situation.

"I do not know if you are aware of the actions by your country's law enforcement bodies that threaten journalists, their citizens, with criminal prosecution for doing their job. Yesterday they faced an unprecedented ultimatum: quit job at Sputnik by January 1 or prepare for jail," Simonyan added.

The Sputnik editor-in-chief noted that she was taking the threats seriously, especially given that Rossiya Segodnya's Executive Director Kirill Vyshinsky, formerly serving as the head of RIA Novosti Ukraine portal, had spent over a year in pre-trial detention in Ukraine over his alleged support for the self-proclaimed republics.

"To be honest, it is hard to imagine that Estonia is ready to send to jail 30 journalists in violation of all the possible rights and freedoms. However, I am, unfortunately, forced to take the threat seriously, being the editor-in-chief of Rossiya Segodnya, since our colleague Kirill Vyshinsky spent 400 days behind bars in Ukraine for his profession," Simonyan added.

Rossiya Segodnya International News Agency said on Wednesday that Sputnik Estonia employees had received letters from the Baltic country's police and Border Guard that warned about possible criminal prosecution unless they stopped working for the news agency by January 1. The 2014 European Union's sanctions, imposed in light of the Ukrainian crisis, were cited as a pretext for the possible legal action.

Rossiya Segodnya said on Wednesday it was not on any EU sanctions lists, also expressing intention to call on the United Nations, the Organization for Security and Co-operation in Europe, the Council of Europe and the European Court of Human Rights to provide a reaction and take steps to protect the journalists' rights.

UN spokesman Stephane Dujarric pledged on Wednesday to look into the situation.