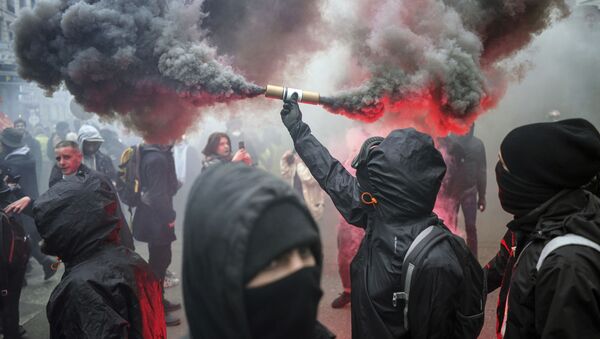 “It’s been 14 days [since the protests started] and Paris [has] come to a halt. The labor movement has managed to put a wrench in the economic machines, which is sort of the way labor unions should do. It might inspire other people worldwide,” Mercier told Radio Sputnik’s By Any Means Necessary hosts Sean Blackmon and Jacquie Luqman on Wednesday.

French citizens have been protesting against Macron’s proposed reform, which they believe would require them to retire later or result in reduced payouts. The proposal suggests combining 42 public pension schemes into one national system.

On Wednesday, French Prime Minister Édouard Philippe met with representatives from the leading trade unions. However, the meetings did not appear to be very fruitful, with Laurent Berger - head of France’s largest trade union, the French Democratic Confederation of Labor (CFDT) - telling media outlets that the union and the Macron administration are “very, very far from a deal.”

Meanwhile, Philippe Martinez, the leader of the General Confederation of Labor (CGT), also said that Macron is "not listening to the people on the streets” and that union members and the French president, a former banker, “don’t have the same values.”

The strike has caused roads in major cities as well as public transportation in the country to be shut down. On Tuesday, police used tear gas to scatter protesters and at least 27 arrests were made in the capital city of Paris, the Guardian reported. Union activists also cut off electricity to around 100,000 homes and offices in France on Tuesday.

“This strike is a major inconvenience for French people in terms of transport, because France has a very well-established public transport” system, Mercier pointed out.

However, despite the inconvenience that the protests have caused for French citizens, “French people at large are still supporting the strike by 62%,” Mercier said, also noting that the wave of so-called “Gilets Jaunes” or Yellow Vests rallies - which started in France in mid-November 2018 in response to Macron’s proposal to raise fuel taxes - was a “catalyst” for the current protests. The demonstrations in France this year represent the “common anger of the French people toward the politicians” who are in the “back pocket of corporate masters,” Mercier explained.

“Public servants are supposed to serve the citizen, but in fact, in most countries, they are serving some powerful corporate financial interest. And that’s [what it is like in] the US -  it’s like that in France, it’s like that in Germany … Hopefully, this thing going on in France will be a wake-up call to make people understand that unions can work, that strikes can work. It doesn't have to be violent protests,” Mercier said.