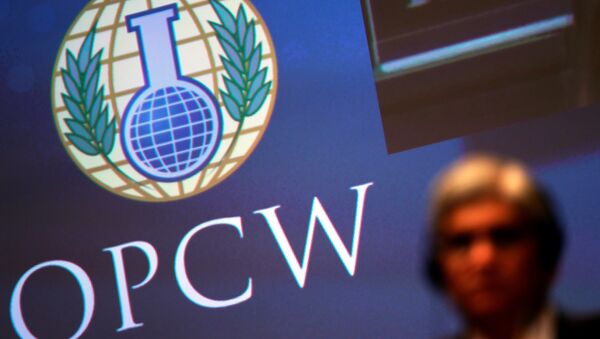 The allegation that Syrian President Bashar al-Assad used chemical weapons is the crux of the Western powers’ Syrian narrative and why, despite overwhelming evidence, groups like the Organization for the Prohibition of Chemical Weapons (OPCW) release doctored information on such attacks, Peter Ford, the former UK ambassador to Syria, told Sputnik.

WikiLeaks on Saturday published documents that contradict the allegation by the OPCW that Assad used chemical weapons on April 7, 2018. The international watchdog organization was tasked with investigating the Douma site following the alleged attacks. The revelation is further proof the US and its allies continue to blatantly ignore evidence that exonerates Assad’s regime of the accusations.

The documents, which included internal OPCW emails, revealed that the OPCW’s actual findings were not correctly represented in its published report.

According to a WikiLeaks summary of the documents, “around 20 inspectors” expressed concern over the OPCW report, which they felt “did not reflect the views of the team members that deployed to Douma.” The documents also reveal the report omitted evidence which undermined allegations that Syrian military helicopters dropped chlorine gas cylinders on the Damascus suburb.

​“It’s an embarrassing development for the three powers [US, UK and France] which used the pretext of the Douma incident to bomb Syria in 2018. The whole narrative for the war of Syria would come apart at the seams” if the allegation that Assad gassed his own people were shown to be untrue, Ford told hosts John Kiriakou and Brian Becker on Tuesday.

“It would call into question not only the Douma incident but all the other many incidents that had been cited to allegedly prove that Assad is a butcher who is gassing his people. And the thing about Douma is that it was the one and only occasion when independent international experts were able to go to the alleged site of the alleged incident and actually find out what went on or what didn’t go on in this case,” he added.

“The evidence pointed away from Assad being responsible. It’s clear from the latest leaks that the people, the experts who actually went to the site were very unhappy about the way their findings were doctored by other officials of the OPCW, some of whom were working from Turkey and working hand-in-glove with the Western powers,” Ford continued.

The WikiLeaks documents also showed that the OPCW had scientific evidence that the victims of the supposed attack exhibited symptoms unassociated with chemical gas exposure and that there was significant debate among OPCW employees on how to phrase in the report that chlorine-containing compounds were found at the site, because only trace amounts of such compounds were detected, equivalent to the amount found in common household cleaning products.

“I wish I could say that I thought something was going to come of this, but I don’t think there will,” Ford said. “Whenever evidence emerges that the rebels are in fact jihadist, al-Qaeda, ISIS [Daesh], the counterargument will be that ‘Yeah, but Assad is gassing his people.’ It’s the crux of the anti-Syria narrative.”

“If that crux is taken away, much of the venom would disappear from the establishment narrative against the Syrian government. That is the main reason why they have to keep upholding these series of falsehoods. It’s crucial to the narrative,” he explained.