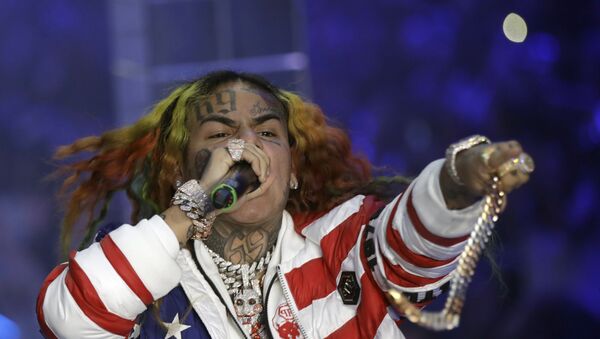 American rapper Tekashi 6ix9ine, 23, whose real name is Daniel Hernandez, pleaded guilty earlier this year to charges of belonging to a notorious gang known as Nine Trey Gangsta Bloods. Prosecutors have reportedly described Nine Trey as one of the most violent gangs in the country.

On Wednesday, US prosecutors said, in a pre-sentencing letter to the judge, that Tekashi's “cooperation was extraordinary” and was “both incredibly significant and extremely useful,” enabling them to charge additional individuals, according to The Guardian.

Ahead of his sentencing, Tekashi expressed his regrets and apologized for joining the gang.

“I’m not a victim. I put myself in this position from day one [...] I made a lot of bad choices in life, but that does not make me a bad person [...] I’m happy that the public was able to witness me dealing with the consequences of my actions because I feel like it sheds a light on what can come from gang affiliation”, the rapper said, cited by The Guardian.

American Rapper Tekashi 6ix9ine Rocks Social Media With Hilarious Sex Shop Ad
After his testimony against gang members earlier this year, Tekashi was labeled as a “snitch” within his community, but his testimony helped get convictions on at least two high-ranking gang members, The Guardian said. Notably, Tekashi reportedly relocated his family before his cooperation became known, and was moved to a different prison facility with no gang members, the media outlet reported.

Last year, Tekashi had a multiplatinum hit song, 'Fefe', with Nicki Minaj, which peaked at No 3 on the pop charts, and 'Stoopid', featuring imprisoned rapper Bobby Shmurda.

Tekashi 6ix9ine has currently served 13 months in a prison and is slated to be released in late 2020.