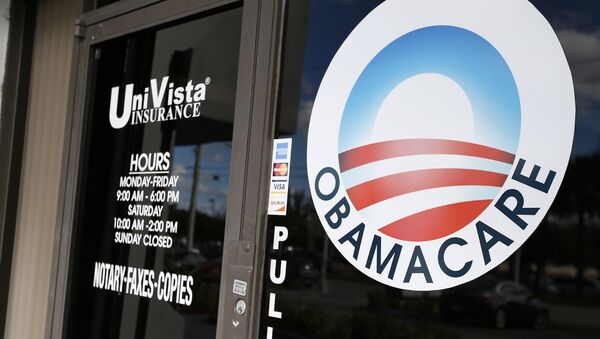 © AFP 2023 / RHONA WISE
Subscribe
International
India
Africa
A US federal appeals court in New Orleans, Louisiana, has ruled that the "individual mandate" requiring Americans to purchase health insurance as part of the Affordable Care Act is unconstitutional, remanding the case to a lower court.

The US Court of Appeals for the Fifth Circuit ruled Wednesday that an essential feature of the Patient Protection and Affordable Care Act of 2010 (ACA), better known as "Obamacare," violates the US Constitution.

"[T]he individual mandate is unconstitutional because it can no longer be read as a tax, and there is no other constitutional provision that justifies this exercise of congressional power," the judges ruled. On the ancillary question of whether or not the ACA is inseverable from the individual mandate, the judges remanded "to the district court to provide additional analysis of the provisions of the ACA as they currently exist."

The Fifth Circuit decision in Texas v. United States is out. Here's the basic rundown: a win for the red states, and a defeat for the ACA, with a remand to the district court for further severability analysis. pic.twitter.com/AAlliHUPPo

​The lawsuit, spearheaded by Texas but encompassing 18 US states as plaintiffs, is based on the principle that when Congress eliminated the financial penalty for failing to sign up for health insurance in 2017, it negated the entire ACA. The plaintiffs argued that the mandate is inseparable from the rest of the ACA and that since the Obama administration and congressional Democrats justified the individual mandate as a type of tax, without a financial penalty attached the law is no longer constitutional.

In a dissenting opinion, Judge Carolyn King argued that the plaintiffs lacked standing to sue because they weren't actually subjected to a coercive command, but rather "an unenforceable statute."

"Even accepting that the coverage requirement acts as a legal command, the individual plaintiffs are still free to disregard that command without legal consequence," she wrote. "Therefore, any injury they incur by freely choosing to obtain insurance is still self-inflicted."

According to data collected by the US Census Bureau, 27.5 million Americans, or 8.5% of the population, do not have health insurance.