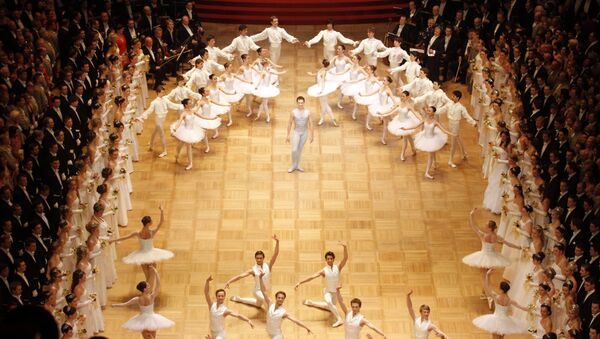 © AP Photo / Ronald Zak
Subscribe
The academy, which was founded in 1771, is one of the most prestigious ballet schools in Europe, with its alumni performing in leading companies across the world – the Royal Ballet and Mariinsky Theatre.

Vienna’s Opera Ballet Academy encouraged its students to smoke to stay slim, said a report published on 17 December by a commission investigating abuse claims. It said "children and adolescents are not sufficiently protected from discrimination, neglect, and negative medical effects".
A government investigation was launched following a report in April by Austrian news magazine Falter, which detailed allegations of sexual, physical, and mental abuse made by former students and staff. The report said that children were kicked, scratched until they bled, and pulled by the hair during lessons. The ballet academy admitted that its students were subjected to abuse and expressed "deepest sympathy" to them and announced measures to improve conditions at school.

Former student Anne-Marie, not her real name, claimed in an interview with Falter that pedagogue, Bella Ratchinskaya, a Soviet ballerina, who previously worked at La Scala in Milan, went beyond the limits during training courses and kicked her in the ankle to see whether she tenses her muscles well. The blow was so intense that Anne-Marie claimed she suffered ligament damage and spent several months in recovery.

"Ratchinskaya was crazy about ballet and still is and wanted the best from us", said ex-student Luisa Solowjowa, but added that her methods were “not right", especially with children.

"Many children have lost their dream to dance", said former student Luisa Solowjowa.

Falter news magazine said students have complained about Ratchinskaya and other teachers to the academy’s director, but their complaints were not taken seriously.

Ms Ratchinskaya, who was dismissed in February, said in a statement provided by the ballet academy: “contact is a part of the training in this profession — it is necessary to touch to make corrections in ballet classes, and this is done all over the world. To the students who I have hurt, I apologise sincerely. I never injured anyone deliberately, and it was never done maliciously".

Tuesday’s report prepared by the government commission said that the academy had endangered the well-being of students, who received insufficient medical care. It also warned that training loads were insufficiently controlled. The head of the commission said children and adolescents were addressed according to their clothes sizes.

"It is clear that children and adolescents are not sufficiently protected from discrimination, neglect, and negative medical effects", the report stated

At the same time, the commission stressed that reforms introduced by the State Opera’s director Dominique Meyer following the scandal were insufficient. Meyer, who will next year become director of the world famous La Scala theatre, failed to carry out his supervisory responsibilities, the commission said.

Reacting to the repor,t Vienna Opera’s ballet company said some content in it was "misleading" and "no longer corresponds to the current status". The school has cut the number of student’s performances and said it would study the report in detail before providing a more elaborate statement.