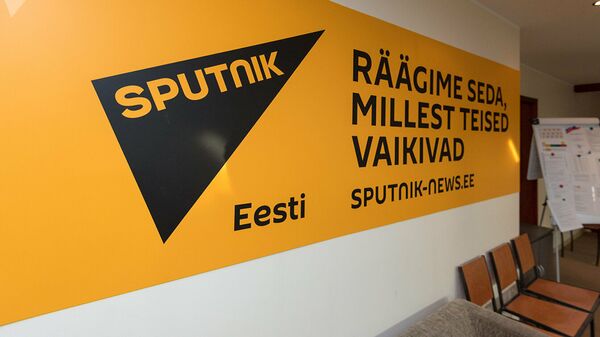 Rossiya Segodnya and Sputnik Editor-in-Chief Margarita Simonyan said in late November, after the office owner broke the contract with Sputnik Estonia under police pressure, that Estonia is a country where Sputnik has faced unprecedented problems, including threats.

Rossiya Segodnya considers Tallinn's actions against Sputnik Estonia to be arbitrary and will turn to the UN, the OSCE, as well as other organisations, the agency’s press service said in a statement.

“Sputnik Estonia employees received letters from the management of the Police Department and the Border Guard of the country with direct threats of initiating criminal proceedings against them if they do not stop working relations with the parent organisation, the Rossiya Segodnya International Information Agency, by 1 January 2020", the agency’s press service said.

"As justification for these actions, sanctions imposed by the European Union on 17 March 2014 against a number of individuals and legal entities in the light of events in Ukraine were mentioned", the press service said.

It went on to say that the agency was not on any EU sanctions lists.

"We consider the actions of the Estonian authorities to be blatant arbitrariness and plan to appeal to such international organisations as the UN, OSCE, Council of Europe, UNESCO, the ECHR, demanding a proper assessment of this unprecedented case of violation of freedom of speech in recent years and measures to ensure the right of our journalists to carry out their professional activities", the press service said.

Kirill Vyshinsky, Rossiya Segodnya's executive director, said he would raise the issue of Estonian threats to Sputnik Estonia employees at a meeting of the presidium of the Russian Presidential Human Rights Council.

In the meantime, the Russian deputy envoy to the OSCE has stated that threats to journalists on the part of Estonian authorities constitute political pressure on Sputnik Estonia.

"Obviously, we are witnessing political pressure on Sputnik Estonia. Obviously, this is not in line with Estonia's commitments to ensuring freedom of expression as an OSCE [member]. We will continue raising this issue, including at the permanent councils of the organisation, and in every possible way drawing public attention to the outrageous actions of Tallinn", Russia’s deputy envoy to the OSCE, Maxim Buyakevich said.

"The Estonian Constitution establishes freedom of expression and the press and the government should practically respect these rights. The right to constitutional law and press freedom is so good on paper", he said.

Office Owner Breaks Contract With Sputnik Estonia Under Police Pressure - Press Service
In November, Sputnik Editor-in-Chief Margarita Simonyan said that Estonia, by far, exerted more pressure on the news agency than anywhere else in the world. According to her, Sputnik Estonia employees were being subjected to intimidation and threats by security services and had their bank accounts closed. Additionally, the Estonian branches of banks that service the agency have frozen all transactions of salaries, taxes, and corporate office rent payments.

Pressure on Russian media is a regular occurrence in the Baltic countries. The Russian Foreign Ministry says it is an orchestrated campaign by Estonia, Latvia, and Lithuania, which renders their declared commitment to the freedom of speech merely rhetoric.