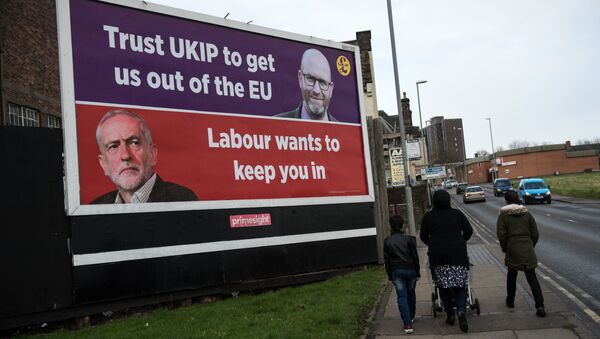 Former British Prime Minister Tony Blair has claimed that the Labour Party needs to dramatically alter its course if it wants to regain popularity with the UK’s electorate.

UKIP Wales leader Neil Hamilton has weighed in on the possibility of Labour changing its policies, as incumbent leader Jeremy Corbyn plans to step down next year.

Sputnik: Should the Labour Party change its political orientation to become electable once again?

Neil Hamilton: Obviously the Labour Party should change its course; in fact, it should totally abandon everything that it stands for if it wants to be acceptable to the British people, but whether Tony Blair is the best person to take advice from, I rather doubt.
I'm personally not bothered about who becomes the new leader of the Labour Party; I want them to be out of office forever, so I think that whoever Jeremy Corbyn wants to succeed him has probably got my vote.

Sputnik: How do you see the UK-EU trade deal negotiations panning out in 2020?

Neil Hamilton: The one thing that we can guarantee is that the EU [member states] are going to play hardball, as they have done all along and we'll face the same mythical cliff edge at the end of the year, as we've been threatened with for the last three and a half [years].

Boris Johnson has to make it absolutely clear to the EU that yes we want a trade deal. But, it can't be on the EU's terms, it's got to be on the same sort of basis as Canada's deal with the EU, but what the EU wants, of course, is to carry on making rules and regulations to bind us, as a price for giving us tariff-free access to their market and vice versa of course, but that is not acceptable.

What we need to do is plough on with free trade negotiations with the United States, Australia, New Zealand and plenty of other countries who are queuing up to do deals with us, so we can tell the EU at the end of the year, that if they are not prepared to talks sensibly; I'm afraid that it's, goodbye.

Neil Hamilton: Financial services are far more important to Britain than trading goods, and yet the single market doesn't apply to financial services, it suits the EU; that's why we've got a one hundred billion a year deficit with the EU in trade in goods- to restrict the single market to goods, they don't want our financial services industries to have proper access to their markets, so they are quite happy with the current arrangement.
Bear in mind, as I said, that we have a one hundred billion pound a year trade deficit with the EU, they are the ones that have got the most to gain by enabling free access to the British market. But even if we do have to trade with the EU on WTO terms; never forget that it's only in a few areas where these tariffs are significant, agriculture particularly, but agriculture is only two per cent of the UK's national income; so it's trivial.

We could easily afford to compensate farmers for whatever losses they may suffer in the short term; while they re-orientate their businesses to take advantage of what's going to open up in Britain. After all, we are massive importers of food from the EU, so if we had huge taxes on imports and exports between us; that market for the EU farmers is going to disappear, and our own farmers can take up the slack.

With cars it's ten per cent, that's the tariff, but most tariffs are tiny or totally insignificant, and they can easily be accommodated. After all, exchange rate movements have over the years, gone up and down twenty or thirty per cent at the extremes, and businesses have managed to cope with that. So, I don't see how a no-deal Brexit would be any different, we don't want to have a no-deal Brexit, but that's up to the EU rather than us.