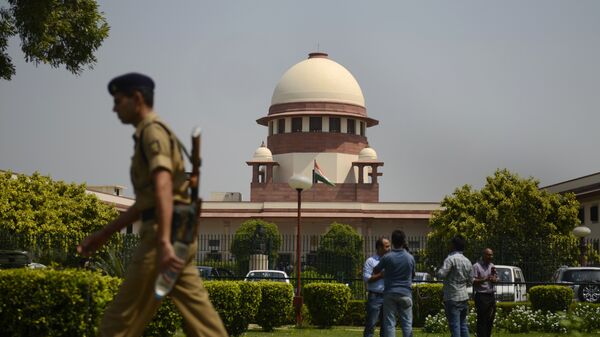 New Delhi (Sputnik): Dozens of petitions challenging India’s controversial new law on citizenship have been filed with the country's top court as street protests continue to rage across the country.

The Supreme Court of India, which took up a batch of around 60 petitions on Wednesday, including those filed by opposition Indian National Congress, however, has refused to stay its implementation. The bench headed by the Chief Justice of India, Justice S.A. Bobde has issued a notice to the federal government and all 60 petitioners challenging the legislation and said the court would take up the pleas in January.

The law, however, does not grant citizenship to Muslims from these three neighbouring countries, something which protesters and several opposition parties in the country held as violation of the Constitution

The Muslim community is protesting against the legislation because “it targets them and considers it is closely linked to the nationwide National Register of Citizens (NRC) exercise” suggested by federal Home Minister Amit Shah. But no decision has so far been taken on NRC.

Delhi High Court to Hear Pleas in Jamia Violence
Meanwhile, the High Court of Delhi has agreed to hear a petition seeking to set up of fact-finding committee to probe Sunday’s (15 December) violence at Jamia Millia Islamia, a premier university in the national capital. Hundreds of students and over 30 police personnel were injured in clashes and several public transport buses were torched or damaged.

Though the case came up before the Supreme Court of India on Wednesday, it refused to intervene, citing that the facts needed to be established first.

Violent protests continued in New Delhi on Tuesday (17 December) against the law, with hundreds of protesters stoning buses and blocking traffic in eastern Delhi. However, the situation in the northeastern region, the hub of anti-Citizenship Law protests, has remained peaceful since Monday (16 December).