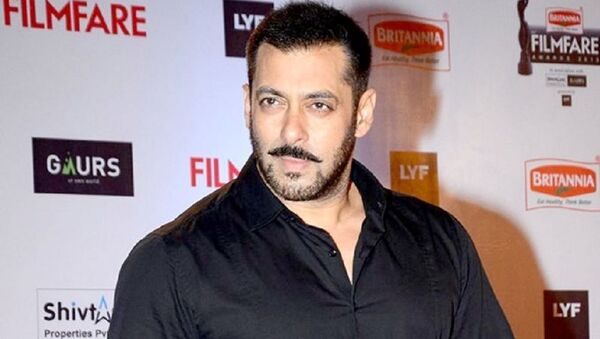 New Delhi (Sputnik): Bollywood superstar Salman Khan's off-screen life is marred by legal troubles. In 2015, he was convicted of culpable homicide for a negligent driving case in which he ran over five people with his car, killing one. He was also convicted in a blackbuck poaching case and got a 5-year jail term in 2018.

The superstar, who is enjoying three decades of tremendous stardom with films like “Maine Pyar Kiya”, “Hum Aapke Hai Kaun” and “Ek Tha Tiger that made the entire nation fall for his charm and charisma, feels that nothing about his life is a secret, and his challenges have made him what he is today.

When Indian news agency IANS asked him how has he learned to deal with crises and controversies, over the years? The superstar replied: "Such is life! Nothing about my life is hidden to people. They know about the challenges that have come in my life and they also know how I have dealt with them, and that perhaps has made me what I am today.”

The actor, who was included in the Forbes Magazine  2015 list of 100 Top-Paid Celebrity Entertainers in the world, is gearing up for his next film “Dabangg 3”. The film is a sequel to the 2012 film Dabangg 2 and the third instalment of the Dabangg film series.

He says that "Working on a popular character and franchise is not that easy. Audiences have certain expectations from the franchise and it is imperative that the next instalment meets the criteria.”

With such a long journey in tinsel town, Salman says that he is always intrigued by and aware of what the audience would like to see.