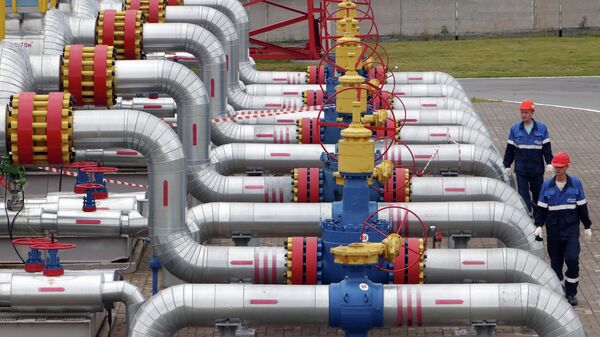 The gas row between Moscow and Kiev shows no signs of abating, with the existing contracts for Russian gas delivery to Ukraine set to expire this month.

The US, which pursues its own goals, should step aside from the gas spat between Russia and Ukraine – this is the only way to get closer to the signing of a bilateral transit agreement, Steffen Kotré, a member of the Alternative for Germany faction in the Bundestag, said.

“I am not willing to speculate on the chances of reaching an agreement. However, I can see that Ukraine is getting one-way support from the US in its partly unclear demands. It would be necessary for the US with its own interests to step aside", he explained adding that “no one, including Russia, is obliged to supply resources or pick some concrete transit route".

“It’s all about providing gas to Europe. Thus, I don’t see any connection between supplies and the transit route", Kotré noted.

He added that Ukraine’s parallel counteraction toward “Nord Stream 2”, which is essential for European gas provision, is totally unfair, bearing in mind that Europe, and Germany in particular, is supporting Ukraine.

“There are plenty of opportunities to guarantee our gas supplies, the terminals are full, and Nord Stream 2 will soon be functioning", the MP stated.

The existing contracts for Russian gas supplies and transit through Ukraine will expire at the end of December. The sides are discussing the possibility of a new agreement and its terms during trilateral meetings. Moscow has stressed the contract should be profitable for Russia, while requiring Kiev to present a plan for modernising its gas transportation system.

Russia has insisted an agreement may be reached conditioned that both sides reject demands for international arbitrage and court proceedings are stopped.

Kiev, for its part, considers the terms to be unacceptable, with Ukraine's Naftogaz estimating its financial claims against Russia's Gazprom to be around $22 billion.