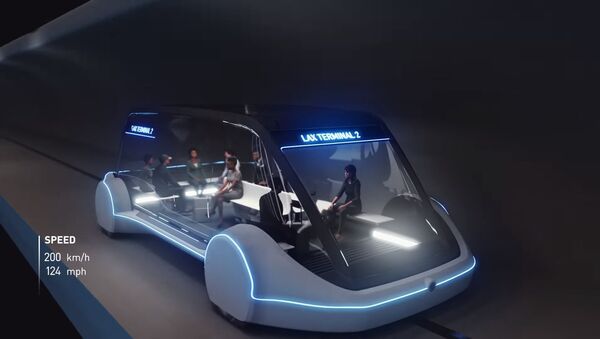 Tim Korso
All materials
Tesla recently presented a new line of products, including an electric pickup truck called the Cybertruck and an ATV dubbed the 'Cyberquad'. The concept for the last addition might have been shown earlier on an explanation video made by Musk's Boring Company.

The Tesla company is now left with only one vehicle to reveal as a part of its "Tesla Master Plan Part 2", drafted by the firm's CEO, Elon Musk, back in July 2016 and which it has so far followed to the letter.

"In addition to consumer vehicles, there are two other types of electric vehicle needed: heavy-duty trucks and high passenger-density urban transport. Both are in the early stages of development at Tesla and should be ready for unveiling next year", the plan said.

A heavy-duty freight truck, the Tesla Semi, has already been unveiled, as well as the Cybertruck and Cyberquad ATV.

A vehicle matching the description of a high-passenger-density urban transport  was previously spotted in a concept video prepared by another company founded by Musk in 2016, The Boring Company. A bus-like vehicle, made mostly out of glass, is shown transporting passengers via a tunnel similar to the one The Boring Company has been building under Los Angeles, California.

Musk sees the implementation of his master plan as vital for building an ecologically-friendly transportation system based on electric vehicles powered by sustainable energy sources.