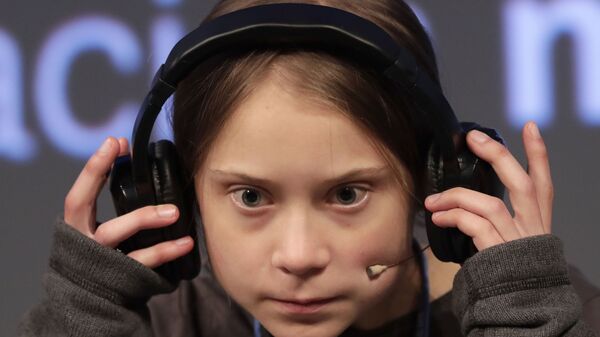 After the teen climate activist tweeted a picture of herself sitting on the floor of an “overcrowded train” in Germany, the transportation giant reprimanded her for holding back that she had a first-class ticket. As it turned out, Deutsche Bahn might have revealed a bit too much information about her trip.

The German train giant Deutsche Bahn has been called to Berlin’s data protection officer over its sarcastic response to climate activist Greta Thunberg’s tweet about “overcrowded trains”, German media report. Maja Smoltczyk, tasked with watching out for citizens’ privacy, has intervened as the company revealed the teenager’s travel data.

As the official’s spokesman told Tagesspiegel, this fact would lead to “a conversation with Deutsche Bahn about handling passenger rights with regard to personal travel data”. The appointment is planned for within the next few weeks.

The discussion will have no "regard to the individual case in question" and will be generally dedicated to the company’s handling of the matter. The spokesman has informed Die Welt that there has been no specific complaint from Greta Thunberg herself.

Deutsche Bahn’s feedback to Greta Thunberg’s tweet triggered a social media storm over the weekend. The activist, who is known for shunning airplanes for the sake of the environment, tweeted a picture of herself sitting on the floor of an “overcrowded train” on her way to Sweden for Christmas, following several busy months.

“Travelling on overcrowded trains through Germany. And I’m finally on my way home!” she posted, attaching a self-portrait gazing through a window while sitting on the floor surrounded by an array of bags.

Traveling on overcrowded trains through Germany. And I’m finally on my way home! pic.twitter.com/ssfLCPsR8o

​Deutsche Bahn had a mixed reaction, as it thanked Thunberg for using one of their trains “with 100 percent green electricity”, but stressed that it would be more honest of the climate activist to admit that she actually had a first-class seat and enjoyed top-tier service. It also gave the travel date and the ICE number.

“It would have been even nicer if you had also reported how friendly and competently you were looked after by our team at your seat in first class”, Deutsche Bahn tweeted in response.

Greta Thunberg Lost Some Credibility After Her Row With Deutsche Bahn - German Minister
Greta, however, stuck to her guns and maintained that she actually had to sit on the floor in not one, but two trains, as one was allegedly taken out of traffic. As a staunch opponent of flying, however, she said she didn't mind overcrowded trains, because it was a greener alternative.

“Our train from Basel was taken out of traffic. So we sat on the floor on 2 different trains. After Göttingen I got a seat. This is no problem of course and I never said it was. Overcrowded trains is a great sign because it means the demand for train travel is high!” Thunberg tweeted.

Still, many were incredulous of the media darling, who was recently named Time Magazine's “person of the year”, accusing her of hypocrisy and lying.