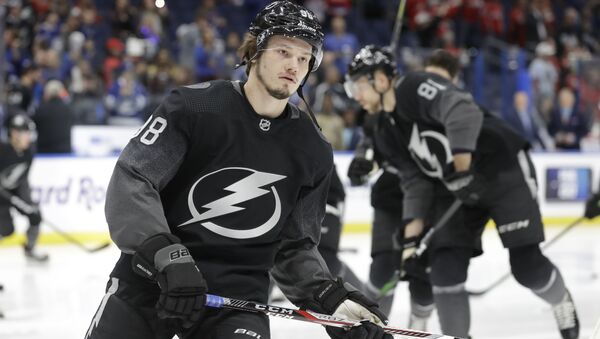 © AP Photo / Chris O'Meara
Subscribe
Ugly Christmas sweaters, yes, the ones we have received so many times from relatives and friends, have become very popular in recent years. The founder of the website UglyChristmasSweater.com said this year’s sales are expected to hit 6 million dollars.

Russian hockey player Mikhail Sergachev, who plays in the NHL for the Tampa Bay Lightning, has posted a photo on his Instagram account showing him and his girlfriend wearing Christmas sweaters with portraits of Russian President Vladimir Putin. The defenceman added the hashtag #notsouglysweaters and turned off comments to the post.

Sergachev, who has almost 60 thousand followers, has appeared in 31 matches this season, scored 4 goals and made 12 assists, spending on average of 19 minutes on the ice. The 21-year-old often updates his followers on how he is spending time. In October he posted a photo showing him and his girlfriend dressed as characters from the popular Netflix show Stranger Things.

“Maybe I’ll just kill Mike. I’m the chief of police, I could cover it up.”-Hopper

As for “ugly Christmas sweaters”, jumpers with tacky designs and silly jokes, they have become extremely popular in recent years and are always included in the list of best gifts. According to Hubbub, in the UK alone, people are expected to purchase 12 million sweaters, despite owning some 65 from previous Christmases. The King of YouTube, blogger PewDiePie recently unveiled his Christmas merch done in collaboration with the website UglyChristmasSweater.com.