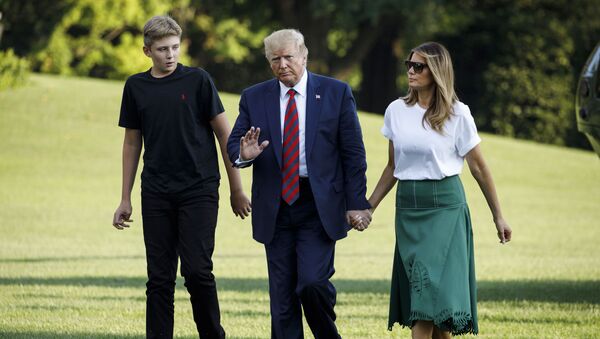 © AP Photo / Carolyn Kaster
Subscribe
International
India
Africa
Unlike the US president’s elder children, who are actively involved in the administration and the Trump business empire, his 13-year-old son’s life has been guarded from public scrutiny. This has not stopped creators from fantasizing about the role the youngest Trump could play.

George Conway Calls Out Melania Trump for Slamming Impeachment Witness Over Son Barron Jab
This, however, did not spare the first child from scandal. A recent kerfuffle came during the ongoing impeachment testimony, in which Pamela Karlan, a professor of public interest law, made the point that a US president does not have the constitutional power to “do anything he wants” like a king might. She then quipped: “The Constitution says there can be no titles of nobility, so while the president can name his son Barron, he can’t make him a baron.”