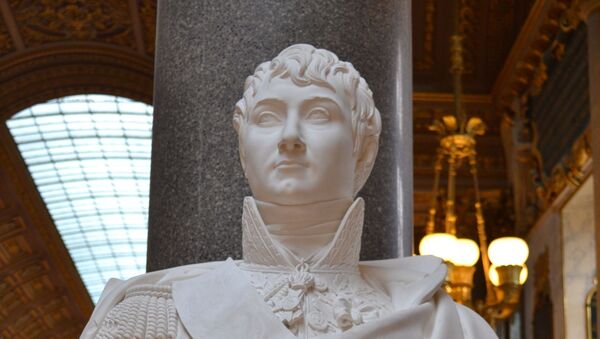 MOSCOW (Sputnik) - History has it that Gudin was hit by a cannonball that blew off one of his legs and shattered the other during the Battle of Valutino. He was taken to Smolensk, and Napoleon stayed at his bedside until he died from gangrene days later.

Russia will respond positively should a request from France be received to repatriate the recently discovered remains of Charles-Etienne Gudin, one of the most prominent French generals of the Napoleonic era who died during the 1812 Russian campaign, Kremlin spokesman Dmitry Peskov said on Tuesday.

"I cannot confirm yet that this topic has been touched upon, but this topic certainly exists. We know that the French and Russian archaeologists indeed made such a discovery and performed a DNA analysis that proved 100 per cent correct, so those are indeed the remains of Gen. Gudin. We know that it is big news for France, and we also know that the agenda has the topic of returning these remains," Peskov said, adding that "[the Kremlin] had already confirmed that if France sends an official request, Russia will respond positively to returning these remains."

Earlier this year, a team of Russian and French archaeologists unearthed a coffin in the Russian city of Smolensk some 250 miles from Moscow with remains believed to be Gen. Gudin. A DNA analysis proved the hypothesis correct. On Sunday, French media reported, citing a source in the Elysee Palace, that Paris had asked Moscow to repatriate the remains. French leader Emmanuel Macron reportedly raised the issue with Russian President Vladimir Putin during the Normandy talks in Paris last week.

When asked if Putin will attend the ceremony of handing over the historic remains, the spokesperson said that "it can certainly be considered if it is coordinated via diplomatic channels."

France reportedly plans to bury the general at a sprawling military museum complex in Paris following a ceremony, which Putin will be invited to attend. The museum grounds also serve as the final resting place for some of France’s war heroes, including Napoleon.