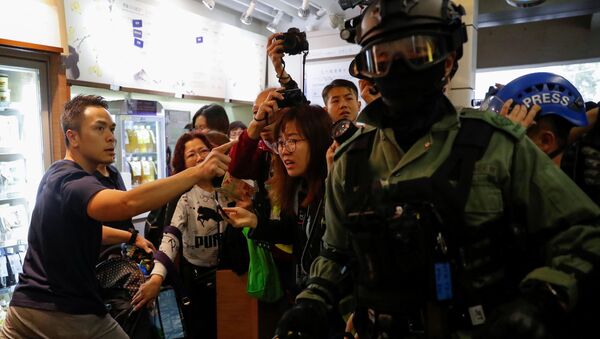 Hong Kong’s Security Bureau has recently completed research for a proposed law that seeks to regulate citizens’ behavior toward city officials - legislation some lawmakers say will fan the flames of social unrest.

Not long after Hong Kong tried - and failed - to ban protesters' use of face masks during public assembly, a new protest-related proposal has made its way to lawmakers’ desks in the Chinese special administrative region.

Secretary for the Civil Service Joshua Law Chi-kon announced Monday at the Panel on Public Service in the Legislative Council that the Security Bureau had completed relevant research on potential legislation banning Hongkongers from insulting public officials - including police officers - reported Asia Times.

Though the proposed law is now making its way to the Hong Kong Department of Justice for consultation and other branches for their opinion on the matter, Law clarified that there was no timetable for the legislation’s advancement and launch.

Nevertheless, Ann Chiang Lai-wan, a pro-Beijing member of the Hong Kong Legislative Council, urged Public Service Panel members to consider talking about the proposal before the end of their term in July 2020. Asia Times reported the lawmaker also asserted that she believes a ban on insulting public officials would bring back the respectability of civil servants.

However, many Democratic Party members, such as Lam Cheuk-ting, contend that the move would create more tension between the public and Hong Kong officials.

Lam pointed out that not only do current clauses outlined in the Public Order Ordinance grant police power to enforce laws in the streets, but cops are not being held accountable for their own behavior toward Hongkongers, and the proposed legislation would make the matter even more one-sided.

Discussions surrounding the potential law come as demonstrations have lessened in violence, but continue within Hong Kong. While radical protesters are plotting upcoming public assemblies during the holidays in the semi-autonomous city, Hong Kong Chief Executive Carrie Lam visited Beijing this week and received words of encouragement from Chinese President Xi Jinping.

“The situation in Hong Kong in 2019 was the most complex and difficult since its return to the motherland,” Xi said moments before a closed-door meeting with Lam on Monday, reported Reuters. “The central government fully recognizes the courage and assumption of responsibility you have displayed in these exceptional times in Hong Kong.”

Likewise, Chinese Premier Li Keqiang met with Lam on Monday and urged the leader “continue to make efforts in stopping violence and ending the chaos in accordance with the law, and restore order.”

Although Lam has not called for the assistance of mainland China or its military forces, Western media reports have claimed otherwise in recent weeks - such as allegations of a so-called crisis command center for Hong Kong being operated by Beijing on the mainland side of the border with the city.

"Given the severity of the situation and the difficulties that we are facing, I can say that the leaders are fully appreciative of the efforts needed," Lam said Monday, according to the Associated Press. “I am heartened because we know that our work to stop the violence hasn’t ended. We are not out of this crisis yet.”