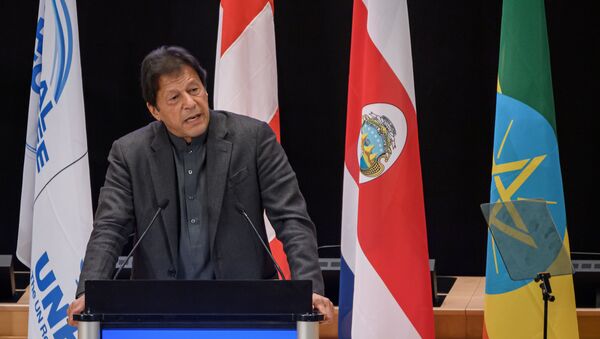 New Delhi (Sputnik): Indian Prime Minister Narendra Modi urged citizens to maintain peace over the new citizenship law, saying that it won’t affect any citizen of India, including Muslims. “This Act is only for those who have faced years of persecution outside and have no other place to go except India”, Modi said on Sunday.

Raising questions over the Indian government’s recent decision on the abrogation of the special status of Kashmir and forging a new citizenship law, Pakistan Prime Minister Imran Khan said that it could lead to millions of Muslims fleeing India, creating "a refugee crisis that would dwarf other crises".

Khan, who was addressing the Global Forum on Refugees in Geneva, Switzerland, said the refugee crisis could even lead to a conflict between the two south Asian nuclear-armed neighbours.

"We are worried there not only could be a refugee crisis, we are worried it could lead to a conflict between two nuclear-armed countries", said Khan on Tuesday.

Urging other countries to step in, Khan said Pakistan would not accommodate more refugees coming from India in the wake of a curfew imposed by India in disputed Kashmir.

India in early August revoked the special status enjoyed by the erstwhile state of Jammu and Kashmir and divided it into two federally administered territories. The state has been under a heavy security blanket since then, virtually disconnected from the outside world. Though many restrictions were phased out, Internet connectivity still remains suspended.

Another legislative move by the federal government led by Prime Minister Narendra Modi was an amended Citizenship Act that grants citizenship to illegal immigrants from six religious minorities – Hindus, Parsis, Jains, Christians, Buddhists, and Sikhs, but excludes Muslims, from Afghanistan, Bangladesh, and Pakistan, if they arrived in India prior to 2015.

The latest law has brought several regions in the country to the brink, with Muslims fearing they might be under threat in India.

India’s federal home minister has been repeatedly reiterating bringing a National Register for Citizens, which he holds would identify all illegal residents, who would be thrown out of the country.  A similar exercise in the north-eastern state of Assam has identified over 1.9 million illegal immigrants, who face an uncertain fate.