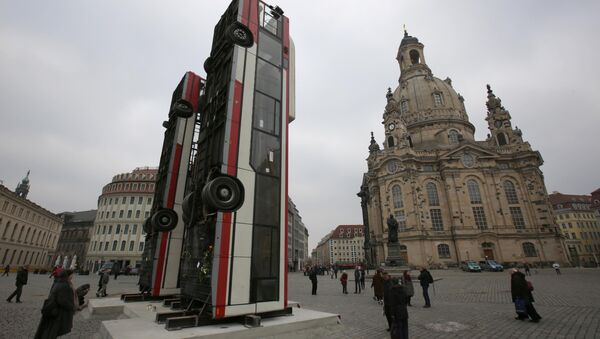 © REUTERS / Matthias Schumann
Subscribe
A passenger shared a photo of the controversial sign from one of the city buses on social media, prompting debate, as many considered the text xenophobic. The scandal broke out amid a local transport company’s attempts to recruit drivers from abroad, as it was failing to find employees in Germany.

A note with a caption written in a gothic font and reading “This bus is steered by a German driver” has landed the local municipal carrier in hot water, German media report. Following uproar on social media, the Dresden Transport Company (DVB) has stated that the driver, who allegedly placed the announcement, deemed xenophobic by some, on one of the vehicles on a city line, is no longer allowed to work with them.

The note was shared online by one of the passengers, who tagged the transport company in his post, asking what it was.

"Hello, the message has reached us. We're also wondering what's wrong with this colleague. (He is no longer on the road and this behaviour will have consequences.)", the company responded.

DVB spokeswoman Anja Ehrhardt confirmed that the incident has been resolved to the Evangelical Press Service (epd). According to her, the line was being served by the carrier’s contractor, Satra Eberhardt, which was immediately informed about the driver’s initiative.

"We can under no circumstances tolerate such actions", Ehrhardt said, adding that such political opinions cannot be shared.

Germans Fear Increase in 'Lawless' No-Go Zones Amid Refugee Inflow - Poll
As she noted, this was not the only incident, as the driver in question reportedly pinned a note with the same message on another line in Dresden on Monday. She could not confirm, however, if it was the same sign as on the viral photo.

The subcontractor’s boss, Matthias Peschke, revealed to Tag24 that he was horrified about the incident.

"This is a shocking situation for us. This is a long-term employee of ours. His service has now been discontinued. He won't be in the plans tomorrow", he said.

The scandal broke out as the DVB is trying to attract foreign drivers to fill vacancies as the company is struggling to find workers at home. According to Saechsische Zeitung’s report in October, they employed 19 drivers from Serbia, even though they lacked German language skills and had to overcome various hurdles.