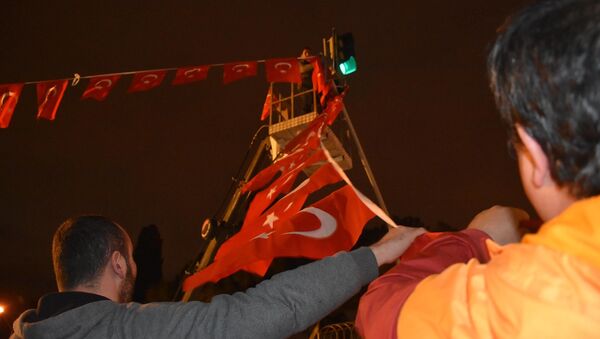 MOSCOW (Sputnik) - A recently appointed district mayor in Turkey’s Izmir province on Tuesday gave testimony to a prosecutor and was later remanded by the court over alleged connections to US-based Muslim cleric Fethullah Gulen’s movement, referred to by Ankara as the Fethullah Terrorist Organisation (FETO), Anadolu news agency reported.

According to Turkey's Anadolu news agency, Urla district mayor Ibrahim Burak Oguz, a member of the opposition Republican People’s Party, was questioned by prosecutors regarding his links to FETO.

Oguz was elected to the position of Urla district mayor on 31 March.

Ankara Slams US Report on 'Political Prisoners' in Turkey as Biased
FETO is comprised of followers of Gulen, a former political ally of Turkish President Recep Tayyip Erdogan, who currently resides in the United States. Turkey has demanded Gulen’s extradition for a number of years.

Ankara accuses the organisation of orchestrating the 2016 coup attempt that left 251 people killed, and nearly 2,200 injured. Since then, over 50,000 citizens have been arrested, including state and military personnel, civil activists, journalists and teachers. Tens of thousands more citizens accused of having ties with FETO have been dismissed or suspended.