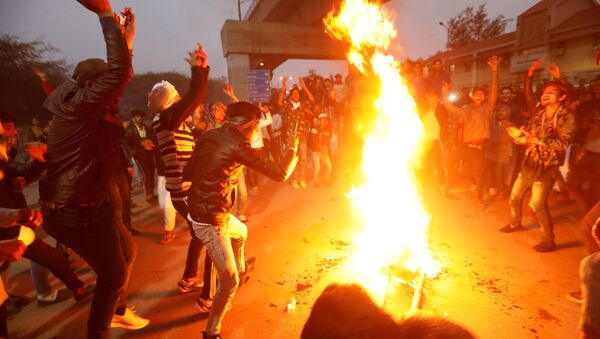 New Delhi (Sputnik): Police in India’s capital came under scrutiny for the use of excessive force on students at a leading university, after a peaceful protest against the controversial new Citizenship Law turned violent and spread to other states.

A video that was in circulation on social media showed, Delhi Police personnel entering the university campus and launching a baton charge on students for provoking officers. Police, however, claimed, they did not use excessive force in dispersing the students.

On Tuesday, police arrested 10 people, none of them students, for instigating violence around Jamia Millia Islamia (JMI). Four public transport buses were torched, while several others were damaged. Over a hundred students and 35 police personnel were injured in the clashes.

Police confirmed, no student of the JMIU has been arrested so far but did not rule out the possibility of further arrests.

"Ten residents of Jamia and New Friends Colony have been arrested. Three of them have a criminal background. They've been booked for rioting and mob violence," Deputy Commissioner of Police (southeast Delhi) Chinmoy Biswal said on Tuesday.

Biswal said, a raid was conducted on Monday night, and the miscreants were identified using videos circulating during the anti-Citizenship Bill protests and with the help of police officers who witnessed the acts of arson.

It was not an "organic protest". The miscreants, police alleged, came with handkerchiefs soaked with petrol, to create havoc.

Massive raids and searches are underway in a Muslim locality in South Delhi close to JMI where the buses were set ablaze, said police.

The police also pointed out that efforts were in progress to track down members of WhatsApp groups that incited rioting and arson during the protest.

Meanwhile, the federal Home Ministry has clarified, Delhi Police personnel did not fire at the protesters. "All ten persons detained have criminal backgrounds; more anti-social elements are being tracked."

​The controversial law grants Indian citizenship to non-Muslim persecuted minorities from Pakistan, Bangladesh and Afghanistan who illegally entered India on or before December 31, 2014. It triggered large-scale protests across the country.

The protesters and several opposition parties have called the law “anti-Muslim” and say it goes against the secular values of the constitution. However, the government assured that no citizen of the country nor Indian Muslims have anything to worry about concerning the new legislation.