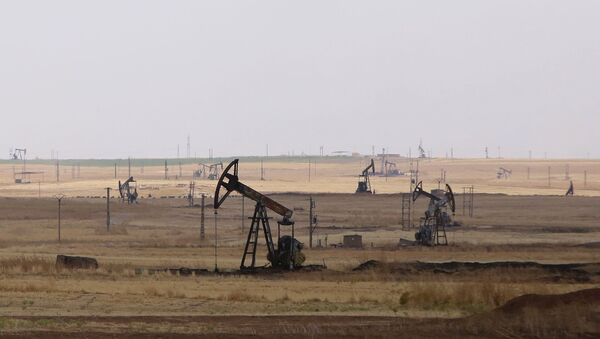 © AFP 2023 / YOUSSEF KARWASHAN
Subscribe
International
India
Africa
MOSCOW (Sputnik) - The United States wants to establish its strategic hegemony over the Middle East while collecting windfall profits from oil and gas facilities under its control, the Syrian ambassador to China said on Monday.

"The end of the game for the US is to break the will and capability of any state in the region to oppose and resist the US. If this is accompanied with some extra pocket money for the US, the better it is," Imad Moustapha, Syria’s former top diplomat in the US, said.

He argued that the US arming jihadists who had been killing and maiming Syrians and destroying critical public infrastructure was a far more sinister crime.

"US policies towards Syria are not merely about oil… they are really based on a grand vision to break down the states of the region, engage them in destructive wars, and render them totally incapable of standing against the strategic hegemony of the US and Israel," the diplomat said.

Bashar Assad Reveals How US Forces Can Be Driven From Syria's Oil Fields
He predicted that any strategy to strong-arm Syria would not pan out and that the US occupation of parts of Syria would eventually end, adding to the list of "failed US military adventures" around the world.

Syrian President Bashar Assad has recently accused the US, in a fresh interview with China's Phoenix Television, of selling oil from captured Syrian oil fields to Turkey. He also claimed that thousands of US troops were still operating in his country, instead of a few hundred that US President Donald Trump said were securing oil fields.