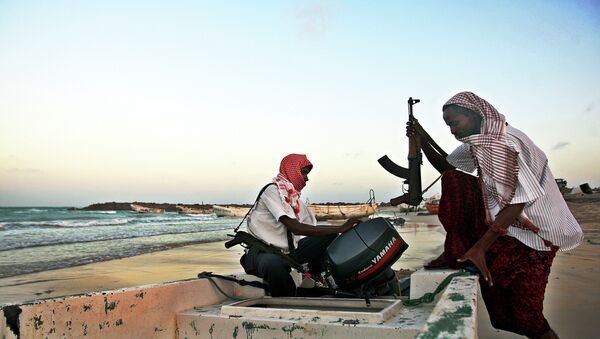 LONDON (Sputnik) - UK's Union Maritime ship owner has announced that its Duke oil tanker was attacked by pirates near West Africa while going from Angola to Togo.

"Our vessel (oil tanker MT DUKE - IMO: 9262259) was involved in a security incident on Sunday at around 0700 UTC. DUKE was attacked and boarded whilst on voyage from Luanda, Angola to Lome, Togo, with a cargo of fuel oil", the company said in a statement.

"We are concerned by the kidnapping of 20 Indian crew members (as reported by the Shipping agency) from the vessel MT Duke in the high seas off the western coast of Africa on 15th December 2019", spokesman for the Indian Foreign Ministry Raveesh Kumar said in response to a query on the incident.

He added that the crew's safety was its top priority, and it would cooperate with all relevant authorities to resolve the incident as fast as possible.

The official also added that the country's mission in Nigeria was cooperating with the local and neighbouring countries' authorities on the matter.

"The safety of hostages is paramount and we continue to engage with Nigerian authorities and other stakeholders closely on the recent incidents", Kumar stated.

According to the ministry, this is the third incident of Indian nationals being kidnapped in the region this year. The most recent happened earlier in December, when media reported that 19 Indian nationals were taken from the Nave Constellation vessel off the Nigerian coast.