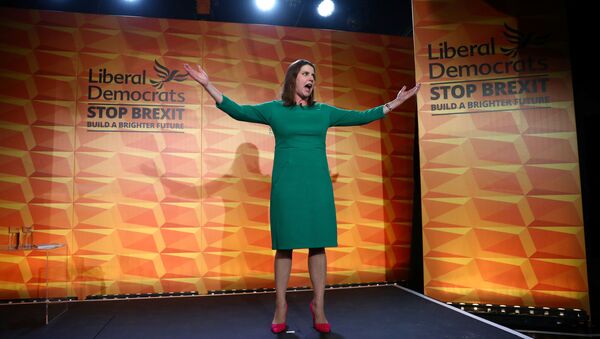 © REUTERS / Hannah McKay
Subscribe
International
India
Africa
A seat in the House of Lords, where peers pocket £305-a-day just for attending, is a common destination for failed politicians and political leaders in the UK, among others.

Former Liberal Democrat Jo Swinson could be heading for the House of Lords after leading her party to an utterly humiliating general election result, in which the party’s number of MPs dropped from 21 to 11, and she lost her own seat.

Interim party chief Ed Davey said he wanted her “back in Parliament as soon as possible”, which could be rapid indeed given she may be nominated as a Baroness in parliament’s Dissolution Honours List.

Davey, who lost to Swinson in the party leadership race last summer, told Sky News the Liberal Democrats were “deeply upset and disappointed” – Swinson was “a friend and a colleague and I want her back in Parliament as soon as possible” he added.

​“She has so much to offer British politics and our thoughts are with her and her family but we know she has a bright future and we thank her for what she did. I hope we can ensure what she argued for and her legacy on the Brexit issue can continue because Liberal Democrats will continue to oppose Brexit in Parliament,” Davey pledged.

The failed leadership candidate went on to not rule out running for the top spot again, and stating the party needed “to focus on ensuring we learn the lessons properly in a quite a deep, profound way”. He went on to attribute the Liberal Democrats’ woeful election performance to Labour leader Jeremy Corbyn.

“One of the lessons I have to say is it can be very difficult for the Liberal Democrats to make progress when there is a hard-left leader of the Labour Party - we found that in 1983 with Michael Foot, we found it in spades in 2019 with Corbyn. If you look at the Conservative leaflets in Liberal Democrat constituencies, it wasn’t so much ‘get Brexit done’ they were talking about, they were saying if you vote Liberal Democrat you’ll get Jeremy Corbyn and that fear factor was a massive issue in the General Election," he alleged.

The scale of Swinson’s electoral calamity was far from predicted upon her taking over the leadership, with eight MPs from other parties defecting to the Liberal Democrats, and the party winning a key by-election in July.

Do you feel sorry for Jo Swinson? pic.twitter.com/EcX4NKUClb

​However, her election campaign was typified by hubris, with Swinson claiming she could be entering Downing Street by Christmas, and making predictions of her party’s seats in the House of Commons increasing by hundreds. She also controversially pivoted party policy away from holding a second referendum and instead scrapping withdrawal outright.