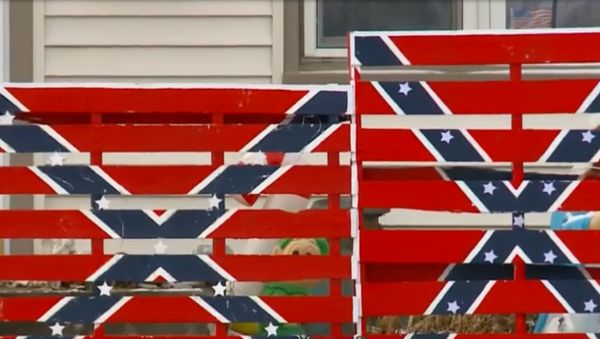 © Screenshot/Courtesy of KCCI
Subscribe
A home in Des Moines, Iowa, displaying paintings of Confederate and Nazi flags and located near an elementary school, has been vandalized.

The home of Des Moines resident William Stark was vandalized last Wednesday, according to a recently published report by the New York Times. The words “Nazi scum” were spray-painted on Stark’s trailer and pickup truck, which were parked outside his house, and on the wooden pallets in his yard. It’s unclear who the vandals are.

​According to Morris Elementary School in Des Moines, Stark has paintings of Nazi, Confederate and American flags on pallets on his front lawn, which are visible to students arriving at and leaving the elementary school on a daily basis.

The elementary school became aware of the display outside Stark’s home after local Brian Asklund, whose grandson attends Morris, shared photos of it on Facebook last week.

"We should all be sickened that someone would promote the hatred espoused by Confederates and Nazis within sight of the front doors of an elementary school,” Morris Elementary School said in a statement released last week.

"At Morris Elementary School, where more than 60% of the students educated are children of color, students see these symbols of hate when they arrive and leave school or are simply on the playground,” the statement adds.

Des Moines Public Schools also said the district has been collaborating with police to ban Stark from school property because of “numerous conflicts” it has had with him. It’s unclear if the conflicts refer to the displays at his home or other issues.

However, Stark claims he does not support Nazis, although he understands why the display outside his home might be offensive to others.

"Yeah, because people don't know what their history is," Stark said. "They turn things into different things. It could be religious if you know what a swastika is,” he added, noting that he is not racist “in the slightest” and that his grandfather fought in World War II. He also said that he only displayed the Nazi symbol in front of his home as part of a dare and that he hopes that children’s parents will use the paintings outside the home to teach them about history.

Al Setka, a spokesperson for the city government, also said that Stark has a right to display the symbols. “While the city may find these signs inappropriate and repugnant, particularly when displayed near an elementary school attended by students of diverse backgrounds, it must be noted that these residents have First Amendment rights protecting their freedom of speech, especially in and around their homes,” he said, the New York Times reported.