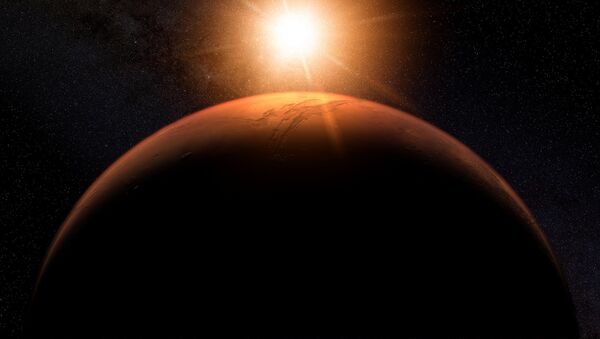 CC BY 2.0 / Kevin Gill / Mars
Subscribe
In preparation for NASA’s long-awaited human mission to the Red Planet, experts are now zeroing in on the operation’s most desirable landing area to ensure astronauts will be able to harvest ice necessary for everything from drinking water to rocket fuel.

Even though NASA’s Artemis III mission is set to return astronauts to the moon by 2024, complete with new, more flexible spacesuits, researchers also have their eyes on another monumental operation: a human Mars mission.

However, in order to carry out this mission, astronauts will have to perform "in situ resource utilization” and collect water ice found within Martian polar caps. In other words, once they leave Earth, they’re on their own in terms of survival.

"You wouldn't need a backhoe to dig up this ice. You could use a shovel," Sylvain Piqueux of NASA's Jet Propulsion Laboratory (JPL) in Pasadena, California, said, as quoted by NASA. "We're continuing to collect data on buried ice on Mars, zeroing in on the best places for astronauts to land."

According to the release, entitled “NASA's Treasure Map for Water Ice on Mars,” researchers using data from the administration’s Mars Reconnaissance Orbiter (MRO) and Mars Odyssey orbiter are considering the northern and southern mid-latitudes, ”which have more plentiful sunlight and warmer temperatures than the poles.”

This rainbow-colored map shows underground water ice on Mars. Cool colors are closer to the surface than warm colors; black zones indicate areas where a spacecraft would sink into fine dust; the outlined box represents the ideal region to send astronauts for them to dig up water ice.
© NASA/JPL-Caltech/ASU

Out of the available areas, scientists are leaning heavily towards the northern hemisphere’s Arcadia Planitia - a region which Piqueux plans to survey with a comprehensive campaign throughout the Red Planet’s seasons.

"The more we look for near-surface ice, the more we find," said MRO Deputy Project Scientist Leslie Tamppari of NASA’s JPL. "Observing Mars with multiple spacecraft over the course of years continues to provide us with new ways of discovering this ice."

NASA’s December 10 release noted that the administration has been indepthly exploring the usability of ice on Mars since NASA's Phoenix lander retrieved samples of the substance from the planet over a decade ago.

"It is with great pride and a lot of joy that I announce today that we have found proof that this hard bright material is really water ice and not some other substance," Phoenix Principal Investigator Peter Smith of the University of Arizona, Tucson, said during a June 2008 news briefing on the lander’s findings.

Aside from the basics of drinking water and jet fuel, humans are going to have to get creative and go 6 feet under or more if they want to survive on Mars, according to a September Daily Express interview with NASA astronaut and physiologist Dr. James Pawelczyk.

“Survival on Mars really means going underground. So possibly identifying lava tubes of creating our own thick-walled structures but using the Martian surface,” he asserted.

000000
Popular comments
Big waste of tax payers money, fix the problems on earth, explore the ocean floor, use your heads for something besides a hat tack.