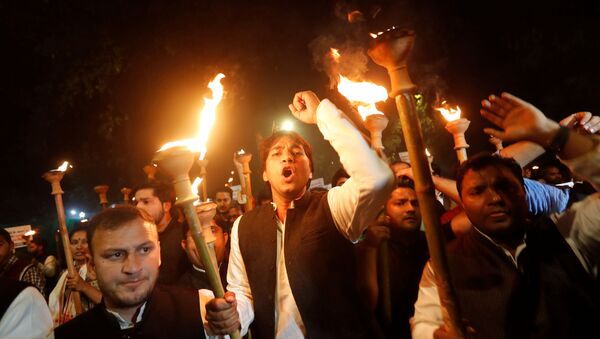 Rishikesh Kumar
All materialsWrite to the author
New Delhi (Sputnik): The Narendra Modi government has sharpened its attack against ongoing unrest, claiming that the anti-citizenship law protests are fueled by an unnamed ‘vested interest’ inside and outside the country. Many scholars and analysts, however, note that the protests are about staying alive and will cause social chaos for years.

“It’s not about any election or political dominance. It’s about existence,” said Syed Mohammad Mortaza, a scholar in Academy of International Studies at Jamia Millia Islamia University.

“We are not ready to live in this country as second class citizen. Not at all… We are ready for long fight,” the scholar added.

In the last week, Muslim students across the country have urged people to join their cause, seeking even those who have never been on social media. The movement is aimed at spreading the word and their voice, even if the India media does not represent them, said one a core member of the protesters under anonymity.

Many Muslims fear that after the National Register of Citizenship (NRC) is launched across India, Muslims will be forced to prove their citizenship; not those of any other faith (i.e. Hindus, Jains, Sikhs, Christians, Parsis or Buddhists), who - after migrating into India from neighboring Afghanistan, Pakistan, and Bangladesh - would only need to show papers, due to an exemption in the citizenship act.

“They will be immune on the basis of religion. So CAA will make Muslims second class citizens,” Mortaza explained, adding that members of Muslim community will have to prove their Indian citizenship by providing ancestral documents.

Asked about Muslims’ concerns, the ruling Bharatiya Janata Party (BJP) brushed aside the fears as being baseless.

“Both (the CAA and NRC) cannot be clubbed. It is some unscrupulous elements that are misleading them and creating an atmosphere of violence across the country. We will expose them,” a BJP functionary, requesting anonymity, stated on Monday evening.

Claiming that the opposition party Congress will not succeed in its attempts, another BJP politician, Vijay Sonkar Shastri, said, “In 2018, opposition Congress in collusion with Cambridge Analytica tried to vitiate the environment of the universities campuses but failed. They will once again (fail).”

According to Urmilesh, a senior journalist and writer, the Modi government appears to have launched a “perception battle” to demean the protests, terming its participants as “anti-national”.

“If difference of opinion prevails at the floor of the house (parliament), how can it not be reflected among the public? How can you say these students or representatives are acting at the behest of some vested interest inside and outside country?”

“Students or Muslims are not calling BJP anti-national, just because BJP differs on the issue. It is nothing but beginning a perception war to de-legitimize the protests, like what the ruling side did in the past, with the untouchables,” Urmilesh said.

In the absence of Muslim representation in the media, the protests will challenging and sustained, he added.

Student protests are spreading beyond government predictions, however.

A group of Muslims have sought support from international organisations and governments as a means of influencing their cause.

“We have lost hope in our country’s opposition parties. They cannot stop this government. Strategies are being made to find support at the international level. People at the individual level have started writing to organisations and national leaders, which can put pressure on this authoritarian government,” an unnamed person representing the strategic team of students said.

Muslims are currently waiting for an 18 December hearing in the Supreme Court of India on several petitions against the citizenship law.

“We will consolidate our fight after that. Currently, we are not organised. But, one thing is for sure, in fight the for existence, Muslims will go beyond the limit. The literate will fight with paper and the illiterate with whatever they can find,” the strategic team member warned.