From Vagina Piercing to Immurement: Top-6 Hair-Raising Ancient Ways to Deal With Criminals 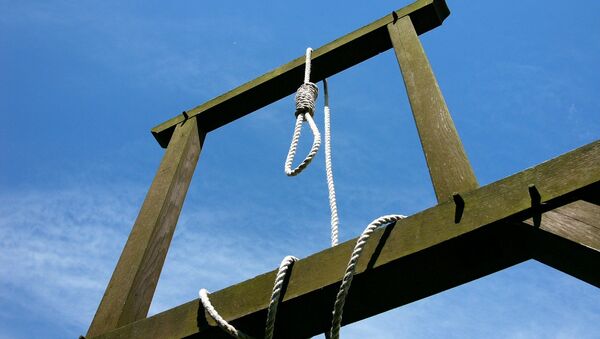 CC0 / /
Subscribe
Lilia Dergacheva
All materialsWrite to the author
Today’s life imprisonment seems to be a far cry from what criminals had to undergo in ancient times for grave offences.

Crimes have always naturally been punishable, with enforcement having traditionally striven to eradicate any wrongdoing, but in ancient times gruesome crimes carried extraordinarily brutal punishments, including horrendous types of death penalties.

Here is a list of arguably the sickest ones:

The Ancient Greeks believed the most efficient way of rooting out crime is to punish an offender by cooking them inside a gigantic bronze bull. The process was not quick and painless, as the criminal locked inside the device was slowly burned to death with a fire lit underneath them, with the pre-mortal agony sounded like a low bellow coming from metal pipes in the “bull’s” nose.

Impalement as a means of execution was notoriously used by 15th-century ruler Vlad the Impaler, who governed Wallachia in present-day Romania, and is thought to have been a source of inspiration for Bram Stoker's Count Dracula.

When impaled, criminals were brutally skewered througt their stomachs, or more specifically rectum or vagina.

After the spike was put “in place”, the force of gravity would drive the body down the spike causing intolerable pain, witht the victim gradually succumbing to death.

It is widely known elephants were often used across Medieval South and Southeast Asia to deal with criminals: for instance in India, this execution method remained in practice until the mid-19th century. Most commonly, elephants would step on crooks’ torsos or heads, with the giant mammals having been specially taught to slice criminals to death with the help of "pointed blades fitted to their tusks".

Per English law, this would be the ultimate punishment for a person convicted of high treason.

Women were instead burned at the stake, which was considered to be a more humane method.

In this form, the criminal would be placed within an enclosed space with no exits in the middle of nowhere, with the culprit being left there to ultimately die of starvation. The method is believed to be a precursor of life imprisonment.

In this ancient Persian method of torture, reserved for those who committed serious crimes such as murder or treason, criminals would be trapped in a hollow trunk or between two boats and force-fed milk and honey.

This punishment had to take place in a swamp infested with insects. Culprits would survive for days covered in milk, and honey, faeces and blood-thirsty insects.