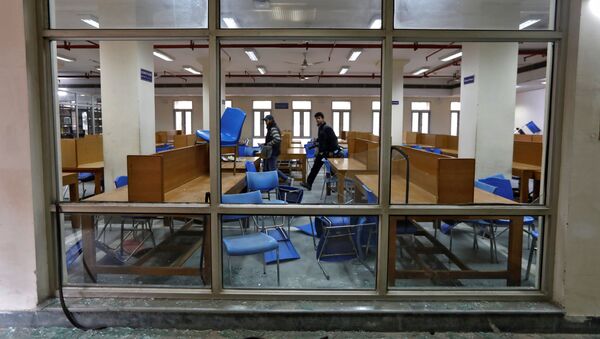 New Delhi (Sputnik): Several demonstrators, protesting against India’s new citizenship law at a premier university in New Delhi, were injured on Sunday during clashes with police. The protest had turned violent with police lobbing tear gas shells and resorting to baton charges to disperse the protesting crowd.

With Sunday the fifth consecutive day of protests across the country against a new citizenship law, people used social media platforms to vent their anger with #ResignAmitShah trending on Twitter.

Amit Shah is home minister of India, what a shame. On one hand police is using all illegal means to suppress the voice of University students and acting as a Mafia while Amit Shah keeps mum on it.
Everyone knows he is responsible for this.
Tadipar should resign.#ResignAmitShah pic.twitter.com/7ZUdOn6SRj

Meanwhile in India, #ResignAmitShah is trending.

​Authorities said more than 100 students and 35 police personnel were injured in the clashes.

“About 4,000 people were protesting and police did what they did to disperse them when the crowd burnt buses", senior police officer Chinmoy Biswal told the media. “If it had been a peaceful mob it would have been dispersed peacefully".

Furious Twitter users described the police move to storm the campus of the university to confront protesters as undemocratic.

more and more power to all the students community ...
Yes except it or not we are the future of this country and we will not back the more u oppres more we rise #jamiaprotest #ResignAmitShah pic.twitter.com/YjgJL1abDD

​In the wake of Sunday's violence, the university has been shut down until 5 January 2020. The government of the national capital has ordered the closure of schools in neighbouring areas on Monday as a precautionary measure.

The bill has been dubbed “undemocratic” and discriminatory towards Muslims by Indian opposition parties. However, these allegations were refuted by Amit Shah in Parliament.