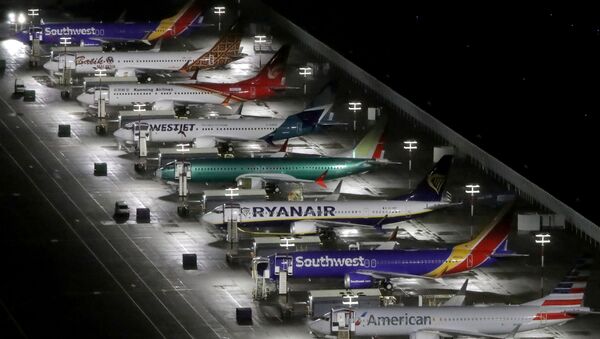 Demond Cureton
All materialsWrite to the author
The company's board of directors have been holding a two-day meeting in Chicago from Sunday, where the firm is expected to announce its production plans on late Monday, according to sources briefed on the situation.

Boeing executives are mulling whether to cut or halt production of the embattled 737 MAX following a decision from the Federal Aviation Administration (FAA) last week to refuse granting the plane's recertification before 2020, according to a source cited by Reuters on Sunday.

The board is also considering a proposal to temporarily cease production of the 737 MAX, the Seattle Times reported on Sunday.

According to the source, the idea of a temporary shutdown has been considered over further production cuts, despite it possibly taking several weeks for the shutdown to take effect, Reuters reported.

Boeing said in a statement on Sunday it would "continue to assess production decisions based on the timing and conditions of return to service" based on "regulatory approvals" which may "vary by jurisdiction”.

The company added that if it failed to receive FAA approval to continue deliveries by the end of the year, it may be forced to further curb production or temporarily cease production of the 737 MAX, with potentially major consequences for the global supply chain.

The news comes after Boeing CEO Dennis Muilenburg held talks with FAA administrator Steve Dickson on Wednesday, with the latter rejecting plans to allow the troubled plane to fly before 2020. A further investigation into production problems with the plane in Renton, Washington is ongoing, Dickson revealed.

Former Boeing senior manager at the 737 factory in Seattle, Washington, Ed Pierson, also testified at the congressional hearing on Wednesday

Dickson added that the planemaker needed to meet roughly a dozen milestones before the FAA would allow the 737 MAX to the skies, despite Boeing's expectations last month to resume deliveries in December.

Dickson told Muilenburg in an email: “Boeing’s focus should be on the quality and timeliness of data submittals for FAA review. He made clear that FAA’s certification requirements must be 100% complete before return to service.

A second FAA email to congressional staff last week said: “[Dickson is] concerned that Boeing continues to pursue a return-to-service schedule that is not realistic... More concerning, the administrator wants to directly address the perception that some of Boeing’s public statements have been designed to force FAA into taking quicker action.

The news comes as numerous carriers have begun grounding or shuttering orders of the 737 MAX until the plane is recertified, with American Airlines stating it hopes to resume the plane to service on 7 April 2020.

Further penalties were introduced by the FAA in December, including nearly $4m in civil penalties from the federal government due to negligence in airworthiness and "subpar" aircraft equipment.

Additional lawsuits have been filed, including from the Kirby Family Partnership, a Boeing investor, who accused the US planemaker of failing to take actions to investigate the safety of the plane until after the second deadly crash in Ethiopia. The crash, which took place in March, was the second plane after the fatal Lion Air crash in Indonesia late last year, totalling 346 deaths.