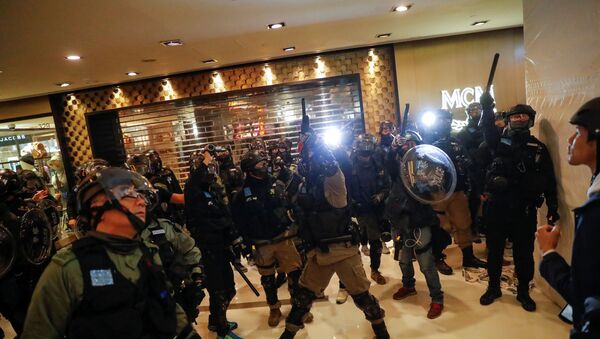 Retailers and riot police will be on high alert in Hong Kong over the next few weeks, as nearly a dozen shopping malls are expected to be packed with protesters during major upcoming holidays.

While sales are generally the reason behind crowded malls at this point in the holiday season, the Asia Times reported shop owners may have to defend their storefronts from demonstrators who have no interest in a “year-end reprieve” to the protests.

The Hong Kong-based outlet reported Monday that radical protesters and police are expected to clash through Christmastime following a “call-out” issued by radical demonstrators via anti-government forums and messenger apps.

According to the message circulated on the platforms, demonstrators are planning to target at least 10 malls on Christmas Eve and several shopping centers on New Year’s Eve in an effort to curb holiday sale numbers and ultimately pressure to government to meet their five central demands.

In addition to the past six months of demonstrations crippling the semi-autonomous city’s tourism industry, retail has also suffered throughout the evolution of the protests, which initially began as a concerted effort against the now-formally withdrawn extradition bill.

This report comes just a day after several major malls were stormed by black-clad demonstrators who clashed with police on Sunday night. Protesters, who Asia Times noted were targeting “pro-China, anti-protest businesses,” like Huawei phone shops and Maxim-owned food stores, were met with tear gas and arrested.

The outlet noted that several of the shopping centers listed in the recent “call-out” were among the malls targeted on Sunday.

Sha Tin’s New Town Plaza, a mall which had its mainland-operated stores targeted by demonstrators earlier this year, was also hit on December 15 by demonstrators who vandalized recently-repaired parts of the shopping center and stormed closed shops, reported Asia Times.

Some 12 individuals were arrested by Hong Kong officers at New Town Plaza alone.

While even Hong Kong Chief Executive Carrie Lam has commented on the recent decrease in protest related violence - which can perhaps be attributed by the arrests of radical demonstrators - Chinese Premier Li Keqiang has urged the city’s leader to do more in curbing political unrest.

“The central government fully acknowledges the efforts made by you [Lam] and the city’s government. Hong Kong has yet to come out from the difficulties,” the Chinese government official, who met with with Lam in Beijing on Monday, said. “The city’s government must continue to make efforts in stopping violence and ending the chaos in accordance with the law, and restore order.”